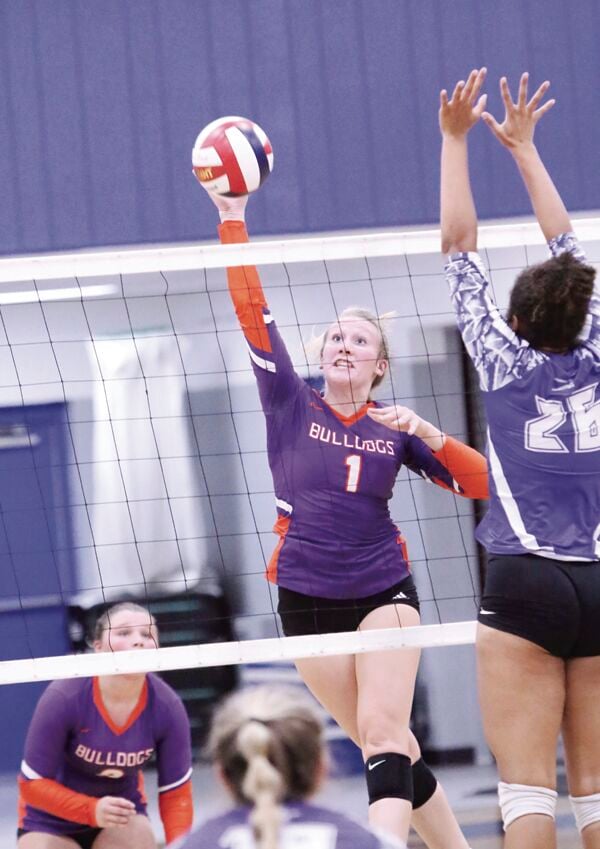 After losing to the Cameron Comets in three sets earlier in the week, the Bulldogs volleyball team won two out of three matches at the Chetek-Weyerhaeuser Invitational on Saturday, Sept. 11. Pictured at left, senior Mariah Bilodeau attacks a ball at the net against Cameron. 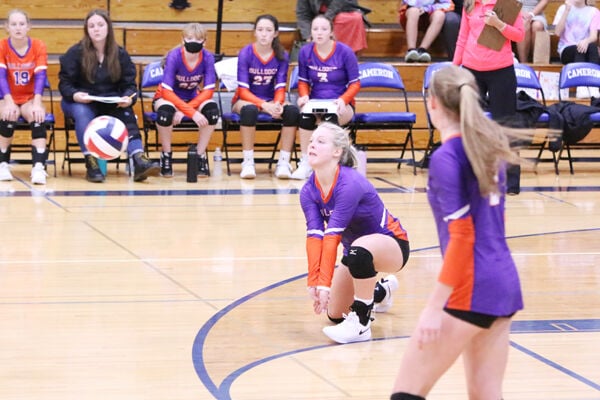 Pictured above, junior Olivia Schofield digs a spike attempt during the Bulldogs three-set loss at Cameron on Thursday, Sept. 9.

After losing to the Cameron Comets in three sets earlier in the week, the Bulldogs volleyball team won two out of three matches at the Chetek-Weyerhaeuser Invitational on Saturday, Sept. 11. Pictured at left, senior Mariah Bilodeau attacks a ball at the net against Cameron.

Pictured above, junior Olivia Schofield digs a spike attempt during the Bulldogs three-set loss at Cameron on Thursday, Sept. 9.

The Chetek-Weyerhaeuser varsity volleyball team was routed by the Cameron Comets in conference action on Thursday, Sept. 9, but the Bulldogs bounced back by winning two out of three matches at the C-W Invitational on Saturday, Sept. 11.

“It was a well-played match, and the crowd was engaged and made for a noisy, fun atmosphere in the gym. Both teams played with great energy on the court. Although Cameron won all three sets, there were some great rallies, and each set started was back and forth until midway through,” explained C-W head coach Heather Bohl. “We were neck and neck in each set with great rallies, and then in both the first and third sets, we let them run away with the

match by allowing so many points in a row to end both sets. We need to make some corrections on serve receive, and as a group, we struggled attacking the ball. We also had too many miscommunications in out-of-system play which resulted in freeballs.

The Bulldogs sent 26 free balls over the net compared to just 11 by Cameron. C-W also averaged a subpar rating of 1.46 on serve receive.

“Serving and receiving should be a strength for us, but it was definitely a weakness in this match and something we need to work on. As a team, we had a great night blocking as we were getting our hands on a lot of balls, and we were very proud of our energy on the court and how we stayed positive in all circumstances and never gave up,” Bohl noted.

Junior Olivia Schofield led the team in serve receive with an impressive 2.07 average on 15 attempts, followed by sophomore Anastasia Mujwid at 2.0 (1 attempt), Claflin at 1.62 (13 attempts) and sophomore Mariah Mitchell at 1.50 (22 attempts-team high).

“Our team learned Friday (Sept. 10) we have lost senior Kendal Evans, a three-year varsity outside hitter, to a season-ending knee injury which is devastating news. We have made adjustments to our lineup in the last two weeks in her absence, and now we need to focus on tweaking our positions to make sure we are in the best position to win matchups against our opponents without Kendal, who has always been a high-performing, consistent all-around player for us,” Bohl said.

The first match of the day for C-W was against Heart O’North foe Cumberland.

“We lacked communication and energy on the court, and we didn’t put up much a fight against Cumberland, handing them a pretty easy victory,” Bohl stated.

Coming off the loss to the Beavers, the Bulldogs played with better communication and energy against Cornell. Although both sets were down to the wire, C-W came out on top winning 25-18 and 25-23.

The final match of the day was against Siren, and the Bulldogs finished the day playing strong as a team, taking two sets 25-14 and 25-13.

On the day, C-W served 89.9% as a team and averaged 1.73 on serve receive. They had a stronger hitting performance collectively, improving their hitting rating to.163.

Claflin had a team high 22 digs, followed by Schofield (18), Jorstad (16), Bilodeau (12), and Nichols and Mitchell who both finished with 9 digs each. Bilodeau led the ‘Dogs blocking with 4 blocks, followed by Jorstad with 3, and Schofield and Widiker with 2 each.