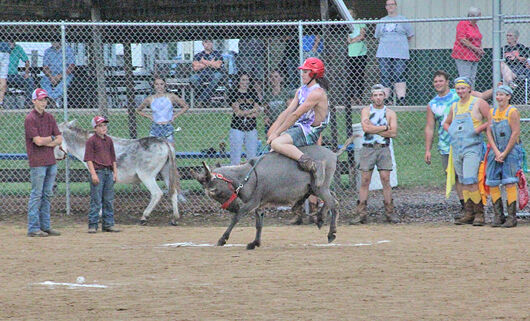 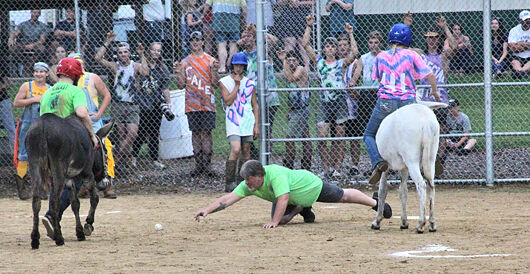 Teams went hoof to hoof in donkey baseball on Thursday, July 22, at New Auburn’s Jamboree Days. Played on a smaller, Wiffle ball sized field, batters hit on their feet, but had to ride or lead their donkey to first base, a feat easier said than done. Infielders and outfielders could dismount to pick up the ball, but had to be atop their trusty—albeit stubborn—steeds to make any plays like throwing to a base or attempting a tag-out. Pictured above, a young woman’s donkey stubbornly stops just short of home base after rounding the diamond as the catcher tries to keep a toe on the bag while reaching for the ball. The donkey eventually moved and the woman scored a run for her team, tying up the game in the bottom of the fourth inning. In the middle of the fourth inning, in-game entertainment included a race around the bases. Pictured below, Special Mike (according to his jersey) attempted to not get bucked off his donkey, with limited success.