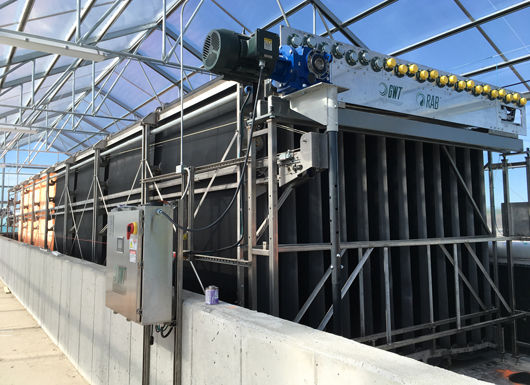 Pictured is the revolving algal bioflim unit developed by Gross-Wen Technologies, based in Slater, Iowa. Wastewater flows into the concrete basin and rotating belts (black, center) dip into the water. Algae grows on the belts and takes up phosphorous and nitrogen from the wastewater. Gross-Wen will be testing to see if a small test unit will work in Chetek’s cold climate. 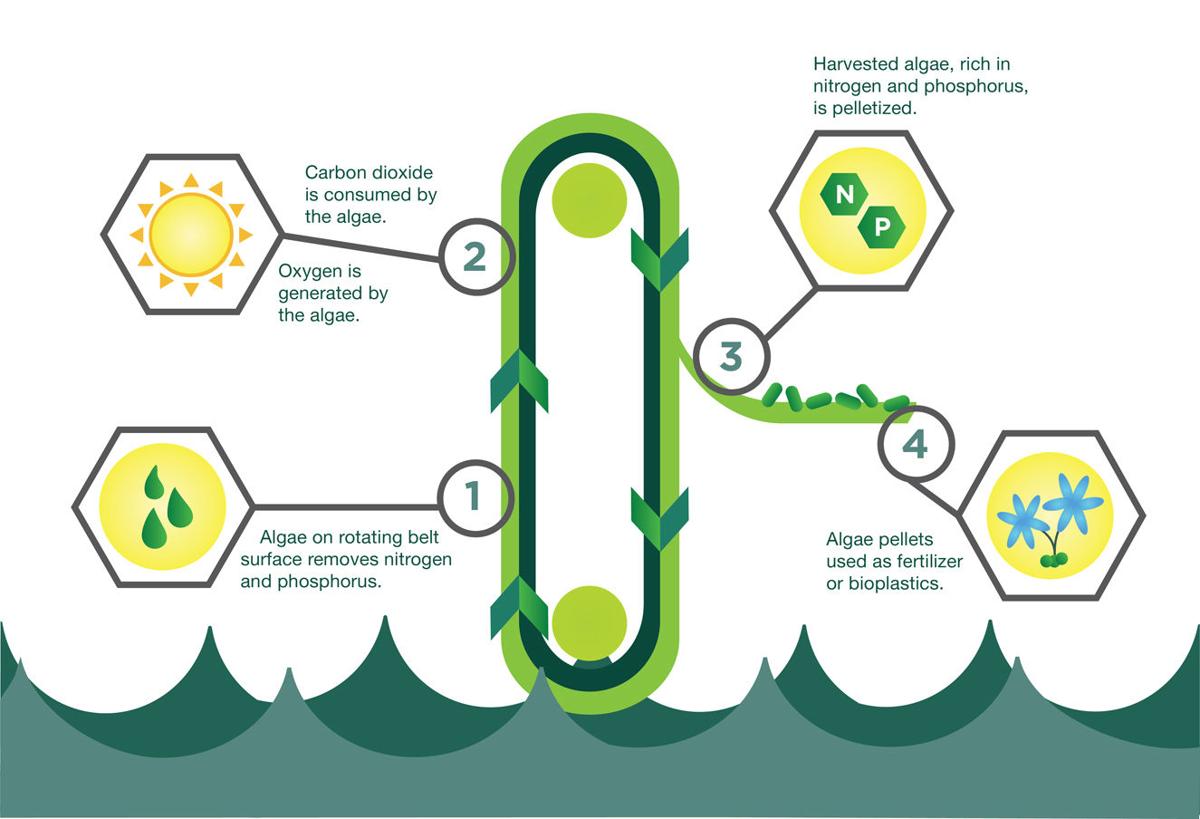 The graphic above gives an overview of how Gross-Wen’s RAB process works to remove phosphorous and nitrogen from a city’s wastewater.

Next week, an experiment will be set up see if algae can successfully remove phosphorous from Chetek’s wastewater before the treated effluent is discharged into the Chetek River.

The experiment—housed in a small, 20-foot trailer—will be set up by Gross-Wen Technologies at the Chetek Wastewater Treatment Plant on Water Street and will operate for about four months.

It uses revolving algal biofilm technology invented at Iowa State University in 2011. Since 2014, Gross-Wen has been developing the technology to sell to wastewater treatment plants. A full-size RAB was built in Slater, Iowa, where Gross-Wen is based.

The city will need to construct a new wastewater treatment plant within the next 10 years to meet more stringent standards for phosphorous removal set by the Department of Natural Resources. Currently, levels are measured at about 3.5 milligrams per liter of water, but need to be reduced down to 0.075 mg/L. Also, nitrogen levels may be reduced in the coming years. This test will see if the Gross-Wen’s RAB process will work for both.

The process uses algae growing on a series of long, wide belts that dip into the wastewater. The belts slowly rotate and the algae takes up nitrogen and phosphorous from the wastewater. The algae is scraped off the belts once a week, thereby removing the nutrients from the water. The harvested algae and can then be processed into useful products, like fertilizer or bioplastics.

In some ways, it is like a larger, stationary version of the Chetek Lakes Protection Associations algae skimmer, but specialized for wastewater treatment.

Jens Dancer, process engineer with Gross-Wen, said the study is important to see if the RAB process works in Chetek’s cold climate.

“We haven’t gone that far north before,” Dancer said. Cooler temps might affect the process and, if so, they want to know how much. They know the algae won’t grow at temperatures below freezing.

Chetek Public Works Director Dan Knapp noted that the cold months are when Chetek’s sewage is at its strongest and most concentrated. It is the best time to see how the RAB handles it.

A similar process that grows algae in miles of glass tubes is being built in Roberts and Waupun, according to published news sources. That process was developed by CLEARAS Water Recovery, from Montana.

But Dancer said Gross-Wen’s process had several benefits over other designs like the glass tube technology, chemical treatments or oxidation ditches. For one, it was easily scalable and more compact than oxidation ditches. The glass tubes required a filter system to remove the algae, while RAB simply scrapes algae off. Chemical treatments, like adding ferric chloride to remove phosphorous, are costly because you have to buy chemicals.

Dancer added that Gross-Wen buys back the algae, either at a fixed rate or at a 50-50 share of any profits made on the sale of the fertilizer. It won’t pay for the system, but can offset costs.

Gross-Wen has been making slow-release fertilizer for golf courses and the turf at Iowa State.

The revolving belts last three or five years, and Dancer recommended the three-year lifespan belts as an economical choice for treatment plants.

The pilot study is scheduled to arrive on Wednesday, Feb. 5, noted Knapp. It will take a month to be set up and begin operating. It has eight small RABs inside. It won’t treat all of Chetek’s wastewater, but siphon off some for the test. The test water will be pumped back into the plant.

Dancer said it must be inoculated, meaning it must grow algae naturally from what is already in the wastewater. Because of this, one RAB’s algae will be different from another RAB’s algae. It isn’t considered toxic or invasive, so any algae that escapes won’t be an environmental hazard, Dancer noted. The algae should be able to handle the natural temperature swings of the wastewater, he said.

For the first half of the test, or two months starting March 1, it will draw wastewater that is halfway through the plant, just after the rotating biological contactors units. For the second half, or two months starting in May, it will draw water from before the rotating biological contactors. The pilot study will end in early July, Dancer estimated.

“The RAB system is enclosed inside of a greenhouse. We plan to heat the greenhouse in winter months to match the influent water temperature to prevent further cooling during the treatment process,” Dancer explained. “During the summer months, the greenhouse is ventilated.”

Because the belts rotate, bringing the algae into contact with sunlight, no artificial lighting is needed.

Dancer thought that the RAB system could obtain the phosphorous reduction the city needed, but the proof would be in test results. A third party will test and verify the results.

“We’ve had good numbers, but it will be to verify our findings,” Dancer said, hopeful of the success of the pilot study. “It is something we are hoping to verify.”