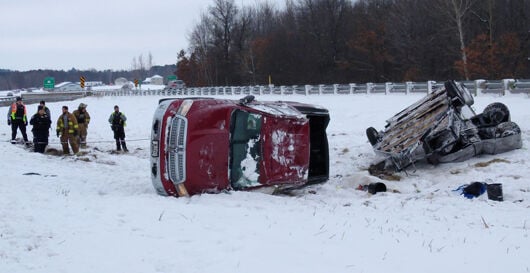 The pickup which rolled over near Chetek on Wednesday, Dec. 30, which was on its roof, is pulled upright by a tow truck. 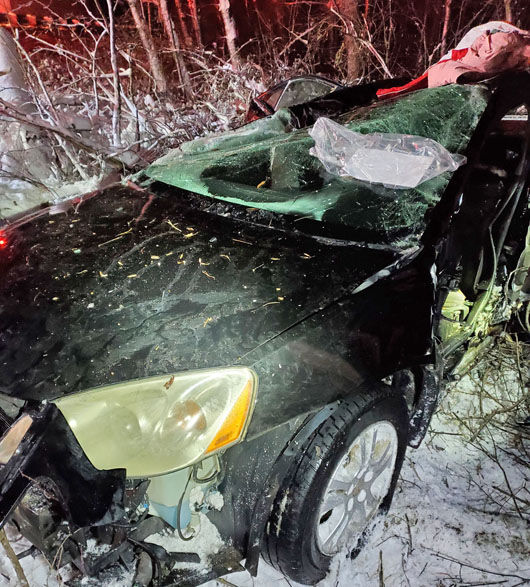 Two young women from Barron were seriously injured when the car they were in rolled on Hwy. 53 on Wednesday evening, Dec. 30.

The pickup which rolled over near Chetek on Wednesday, Dec. 30, which was on its roof, is pulled upright by a tow truck.

Two young women from Barron were seriously injured when the car they were in rolled on Hwy. 53 on Wednesday evening, Dec. 30.

Two people were reported injured when a 2006 Pontiac G6 sedan went out of control and struck a tree along southbound Hwy. 53 near 16-1/2 Avenue on the evening of Wednesday, Dec. 30, 2020, according to the Barron County Sheriff’s Department.

The crash was one of many reported to Barron County law enforcement during the final week of 2020, as sub-freezing temperatures iced up roadways throughout the county.

The Dec. 30 accident report said that the vehicle was being driven by Isabella Johnson, 18, of Barron. She and her passenger, 17-year-old Rayann Tallman, also of Barron, were treated at Marshfield Medical Center, Rice Lake, for what were described as suspected serious injuries.

According to a family member’s posts on social media, Johnson was transferred to Regions Hospital in Minnesota and Tallman was airlifted to Marshfield. Johnson was released from the hospital on Friday, Jan. 1.

A GoFundMe page was set up for Tallman. Information shared on that page said she underwent spinal surgery and had regained movement in her arms and hands. The donation page was set up to help the family with expenses. As of Tuesday, Jan. 5, it had raised $2,545, exceeding a $1,000 goal. The page can be found at https://gofund.me/6d6310be.

Another crash happened on Hwy. 53 near Chetek on Wednesday afternoon.

A Dodge pickup, pulling a trailer with an ATV on it, rolled over in the median of southbound Hwy. 53, near the CTH A bridge. A man in another vehicle traveling with the pickup, said they were returning home to Sparta after leaving Hayward.

According to the sheriff’s department report, a couple and two children were in the vehicle. The couple had suspected minor injuries, as well as one of the children, an infant. Only the driver, Lee N. Culpitt, of Sparta, was transported to Bloomer hospital, the report said.

Icy conditions on the road may have been a factor in the crash.