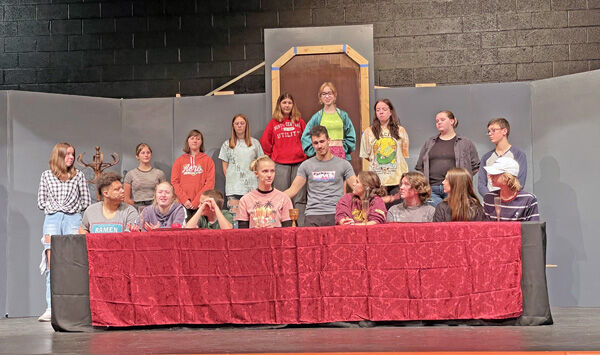 Pictured is the entire cast of The Addams Family musical, showing Friday to Sunday, Nov. 5–7.

Pictured is the entire cast of The Addams Family musical, showing Friday to Sunday, Nov. 5–7.

It has been two years since the C-W Drama Club  has staged a play and 5 long years since they staged a musical, but the weekend after Halloween they are bringing the Addams Family to town!

A bit of background

Though most folks are familiar with the TV version and it’s finger-snapping theme song, the musical version is  slightly different fare.

However, in the musical production the audience gets to meet “straight-arrow Midwesterners.” Mal Beineke and his wife Alice, portrayed by Cooper Antczak and Lexi Guthman.

When the Addams Foundation licensed the use of the name, they retained creative control and insisted that the producers devise an original musical based solely on the actual Addams’ cartoons, not on the television series or films.

As such, there is no Cousin Itt or Thing.

The last time the C-W drama club staged a play was five years ago when they put on “Cinderella.” That means that most if not all of the current actors have never been in a musical.

It is a big undertaking, but the cast sure looked cool and confident at a recent rehearsal. They began rehearsing on August 13 and have been doing Monday, Tuesday and Thursday evening rehearsals plus Saturday mornings ever since.

On Saturday, seniors Marissa Zelek, Abbie Kane and Lexi Guthman were interviewed. They said the play is really funny, has interesting characters and fits well with Halloween.

There will be a pit orchestra with Andrew Elbin as the music director.

The play will have one intermission.

Rachel Westberg and Bob Rogers are the co-directors.