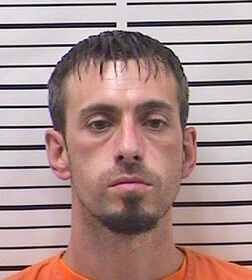 An alleged explosive device of 50 pounds of Tannerite turned out to be an empty telescope tube with a wire hanging out of it and placed in a small handcart to appear heavier. The tube appeared to be 2–3 feet long.

An alleged explosive device of 50 pounds of Tannerite turned out to be an empty telescope tube with a wire hanging out of it and placed in a small handcart to appear heavier. The tube appeared to be 2–3 feet long.

A Chetek man was arrested late Sunday evening, May 2, ending a nearly six-hour standoff with law enforcement officers at a West Banks Street home, that included the evacuation of neighboring residences. The man allegedly threatened to shoot officers and said he would detonate 50 pounds of Tannerite explosive if they approached his residence.

Kevin Swartz, 35, was arrested without incident, according to Barron County Sheriff Chris Fitzgerald and Chetek Police Chief Ron Ambrozaitis in a joint press release. After Swartz was taken into custody, police found that Swartz had no weapon, that there was no Tannerite and that the explosive device was an empty, painted cylinder.

The incident started just after 4 p.m. on May 2. Chetek police officers responded to 1203 West Banks St.—Swartz’s residence—for a report of a man “acting strange and paranoid.” When officers arrived, Swartz allegedly told officers that he had a handgun and that he had an explosive device in the house.

Fitzgerald said police negotiated with Swartz for about 30 minutes before he came to the door with a black cylinder, placed in a handcart to appear heavy. He claimed it was filled with 50 pounds of Tannerite. Tannerite is a “binary explosive” and small amounts (two pounds or less) are used in target shooting with high-velocity rounds at medium to long range.

The cylinder later turned out to be a telescope tube, which Swartz allegedly stuck a wire in and then placed in a red handcart, according to Chetek police officer Emily Breidenbach. The telescope tube was empty.

Fitzgerald said Swartz allegedly threatened to shoot officers, officers’ families and the makeshift bomb if they approached the house.

Nearby residences were evacuated as a precaution, a perimeter was set up and the Barron/Rusk Emergency Response Team was called, along with the Chetek Fire Department, two Wisconsin State Patrol troopers and three Wisconsin Department of Natural Resources wardens. A K9 officer was called but the dog was not deployed, Fitzgerald said.

Negotiations continued with Swartz for several hours, with Swartz communicating through the house’s windows. Fitzgerald said negotiations were conducted by Justin Rausch, an ERT member, from the driver’s seat of the armored Bearcat. Rausch, who has negotiation training, used the vehicle’s PA system to communicate with Swartz,

Fitzgerald said gas and flash-bang like devices were shot through windows in the house to attempt to persuade Swartz to exit, however, he allegedly refused to exit.

The ERT’s Bearcat armored vehicle was used to take off the residence’s deck and the ERT eventually breached the house through the front door, sometime after 9 p.m. Inside, Swartz had climbed into the building’s ceiling crawl space.

Swartz eventually fell through the sheetrock ceiling and was taken into custody without incident around 10 p.m. He was taken to an area hospital for evaluation, but Fitzgerald could not comment on Swartz’s status, other than that he was not injured.

Swartz was still under evaluation as of late afternoon on Monday, May 3, and he would be booked into the Barron County Jail once he was released from evaluation, Fitzgerald said. Asked if Swartz was suspected of being under the influence of drugs or alcohol, Fitzgerald said he could not say at this time.

There was some damage to the house; gas and flash-bang rounds were shot through windows, the front door and deck were damaged and parts of the ceiling were breached when Swartz was in the ceiling, Fitzgerald said. The residence was released back to the owner and a family member of Swartz’s on Monday, Fitzgerald said.

In total, 20 to 30 law enforcement officers were involved, as well as numerous Chetek firefighters, Fitzgerald said.

Local law enforcement dealt with another bomb scare last month. On April 23, Rice Lake Police shut down part of Cedar Side Trail when a suspicious item was found. That cylinder-shaped item—which was wrapped in electrical tape and capped at both ends—was a harmless geocache, used in geocache hunting, a popular recreational activity.

City of Chetek building inspector Joe Atwood said on Tuesday, May 4, that damage to the house has made it unfit for human occupancy. Until the damage is fixed, no one, including the owner, can live there. County property records list the owner as Carol Russo.

Atwood said all the windows and doors in the house were broken, parts of the ceiling were tore down, as well as some of the walls. As such, the house was currently uninhabitable. It was not currently condemned, but could be condemned if the damages were not eventually fixed.

Repairing the damages would be the responsibility of the owner. Fitzgerald and Ambrozaitis said their respective departments were not responsible for the repairs and no assistance was being offered at this time.

Atwood said Russo’s insurance was not submitting a claim as the damages were not covered in the insurance policy. The American Red Cross was not able to provide assistance as it was not a natural disaster.

Atwood said the owner was in contact with the Salvation Army, however with four dogs, it would be difficult to find a temporary residence for her.