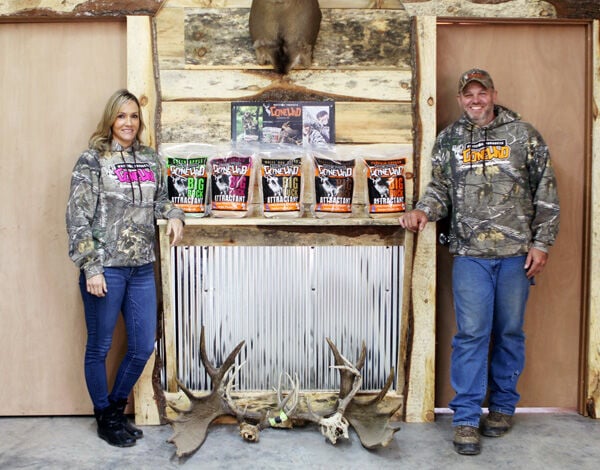 Whitetail Products Gone Wild, a deer attractant made locally between Chetek and Cameron, has become a booming business in the outdoor industry in recent years. Owned by Aaron Pisa and his fiancée Nicky Repka, pictured, the highly-sought deer attractant comes in five different flavors. 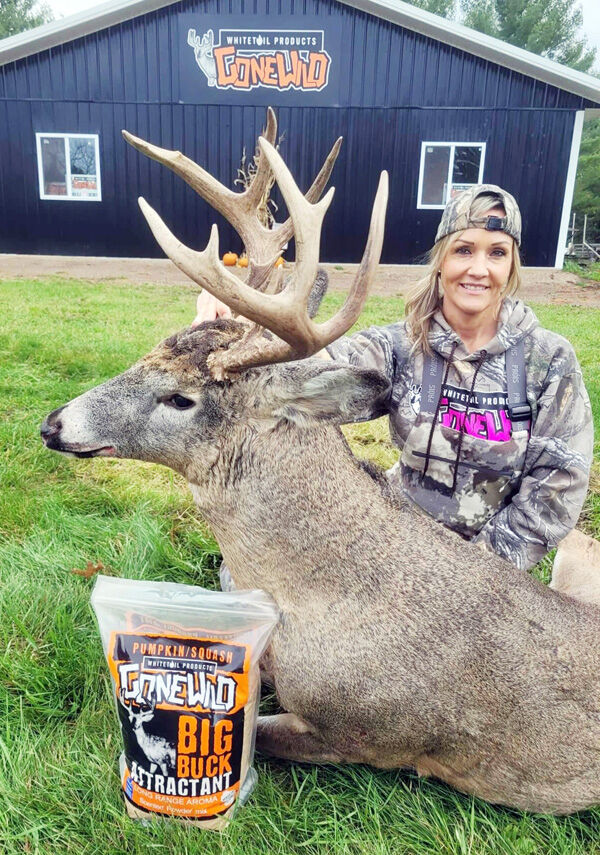 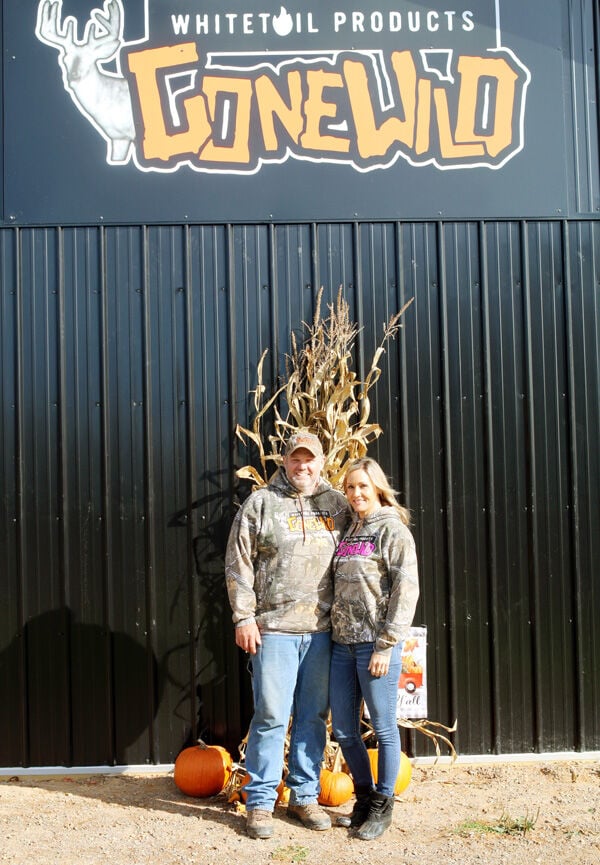 Whitetail Products Gone Wild, a deer attractant made locally between Chetek and Cameron, has become a booming business in the outdoor industry in recent years. Owned by Aaron Pisa and his fiancée Nicky Repka, pictured, the highly-sought deer attractant comes in five different flavors.

Whitetail Products Gone Wild is quickly becoming one of the hottest deer attractants in the outdoor industry. These locally-made whitetail deer products may put the small towns of Chetek and Cameron on the map but are already paving the way for a promising life for owners Aaron Pisa and fiancée  Nicky Repka as business is booming.

The idea to build a business around all natural hunting products certainly wasn’t on Pisa’s radar a few years ago. But one “Ah-ha” moment has put Pisa and Repka’s growing business on the fast track for success.

Pisa and Repka, who both grew up in Rice Lake and relocated to the Chetek area—Pisa has lived here for about 14 years now—laughed as they recalled and retold where the idea came from a few years ago.

“In 2018, we saw a giant buck eating some of our pumpkins and squash in the yard,” Pisa explained. “The very next day, I went out to find some pumpkin or squash deer attract and couldn’t find any anywhere. I instantly started the process of chunking up leftover pumpkins and squash in the house, dehydrating them and then grinding them in a flour mill into a powder substance.”

Repka noted she was a bit skeptical at first and thought it may be another one of Pisa’s “wild” ideas that he often takes and runs with.

Pisa put out his homemade attractant that week and although the deer seemingly were attracted to the smell, they would not eat it.”

“They didn’t like it. We knew they were coming to the aroma, but it wasn’t palatable to them.” Pisa noted.

From there though, Pisa knew he was potentially onto something that the outdoor industry did not have on the market.

Pisa and Repka began making several concoctions and blends out of their kitchen as a fun hobby. Through trial and error, the duo began to perfect their first marketable deer attractant.

“It took about a month for us to get dialed in. Once we got the main seven ingredients down. We realized they weren’t eating it initially because it was too bitter, so we sweetened up our product, which is actually an attractant powder,” Pisa stated.

The deer attractant provides nutritional value to the deer with all natural vitamins and minerals. The pumpkin/squash blend was the couple’s first of five different powders that are now available.

Besides the pumpkin/squash combo, customers can purchase the 8-pound bags of attractants in four other flavors: green apple, white oak acorn, beets/turnips and roasted soy bean.

“Our goal was to make the best deer attractant that anyone has ever used. We feel like we’ve done that, and our business has exploded since that first year,” Pisa said.

“There’s several scams on the market in the outdoor industry, but ours isn’t one of them; our product works. There’s several outdoor television shows now who use and support our products. They’ll tell you it’s the best, too,” Repka added.

Pisa noted that Whitetail Products Gone Wild recently signed a contract with Blaine Anthony–The Bear Whisperer on the Pursuit Channel. The couple is planning more sponsorships with outdoor shows in the future.

“The pictures, texts, emails and Facebook comments show how successful our the products are and confirm that it works,” Pisa added.

By 2019, Pisa and Repka created a Facebook page and started marketing Whitetail Products Gone Wild. It quickly took off and the couple realized they had a very effective product as 70 percent of sales were from repeat customers.

Still running as a hobby and part-time business, the couple created and sold 16,000 pounds of the deer attractant in just a couple of months. They also had over 40 bucks reportedly harvested while using Whitetail Products Gone Wild.

By 2020, Pisa and Repka expanded by putting up a 12-by-20 “mini factory” as Pisa called it. Within a 50-mile radius of the Chetek/Cameron area they call home, they sold 60,000 pounds of attractants with more than 100 bucks taken using the deer attractant.

With each year and expansion, they knew we needed a bigger facility to produce more Whitetail Products Gone Wild. So, in 2021, Pisa and Repka built a 26,000-foot factory with a showroom and office on CTH M, north of Chetek and across the road from the restaurant known as R Bar.

“Right now, we are capable of producing 1,000 products per day and our goal is to do close to 120,000 pounds of product this year. By 2022, we will be in full-time operation for Whitetail Products Gone Wild,” Pisa said.

Whitetail Products Gone Wild is sold at 60 local sporting goods stores in the area and is also sold at Scheels in Eau Claire, as well as online. Customers can also purchase products right at the facility located at 1193 25th St., Cameron. The deer attractant powder comes in 8-pound bags but can be purchased in increments as large as 150-pound drums as well.

“We love to support the local businesses and appreciate them supporting us and our products. I hand deliver everything to all of the stores personally in a 100-mile radius. However, it is also available nationwide and can be purchased online,” Pisa explained.

Growth and expansion is the plan moving forward with more products in the works for next year. Bear hunting products such as bear bait powder and liquid mineral are already available.

“We want to keep expanding. We will be coming out with more products, including pond flavoring mineral with pond additives in the near future,” Pisa said.

“We took our dream of hunting and turned it into a full-time business,” Repka said.

Below is an excerpt Repka emailed:

Night 1—Pulled back on this 12 pointer, but he spotted me and bolted. I was shaking so bad I darn near fell out of the tree.

Night 2—He came in again but just out of reach and behind trees and branches. He sat still and just watched the does. Then started to chase them around the woods leaving me with no shot.

Night 3 (Oct. 26)—Nine does came in and were rustling in the woods. A doe ran in and I heard a grunt. I got ready as he ran in and scattered all nine does. I was pulled back, but he was quartered to me. He put his head down and turned almost broadside, and I let it fly; I double-lung shot him. Well that was an adrenaline rush!