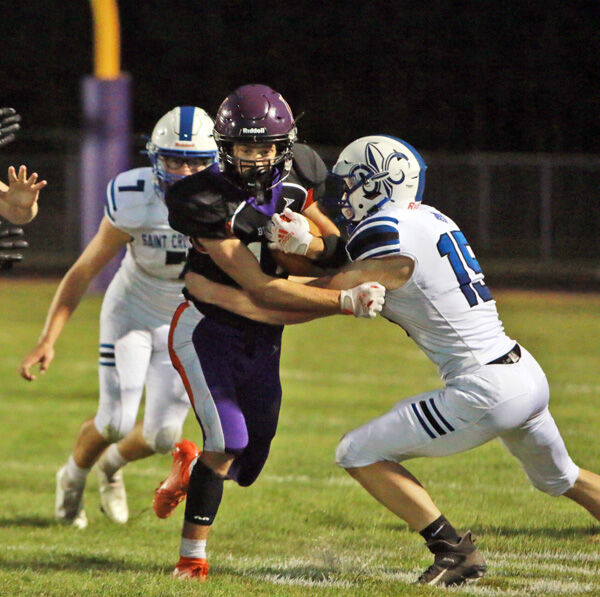 The Chetek-Weyerhaeuser football team saw its season record slip to 0-4 when it was dominated 48-8 by a physical and athletic St. Croix Falls squad on Friday, Sept. 10. Pictured is sophomore running back Wylee Huset attempting to break free from a Saints defender. 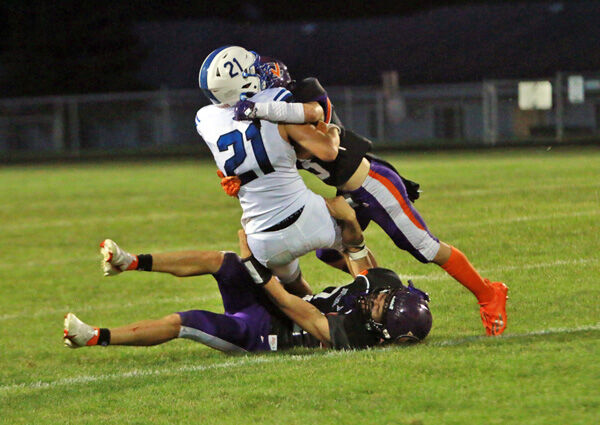 The Chetek-Weyerhaeuser football team saw its season record slip to 0-4 when it was dominated 48-8 by a physical and athletic St. Croix Falls squad on Friday, Sept. 10. Pictured is sophomore running back Wylee Huset attempting to break free from a Saints defender.

The Chetek-Weyerhaeuser football team suffered its largest loss of the season when it was crushed 48-8 on its home turf by a big and physical St. Croix Falls team on Friday, Sept. 10. It was a game where the Saints led from start to finish and racked up 509 yards of total offense.

“We keep shooting ourselves in the foot with penalties and blown assignments. We need to have all 11 guys doing their job on each play to be successful; that hasn’t happened just yet,” stated C-W head coach Bill Knickerbocker Jr. “St. Croix was a large physical football team.  They also had several skilled athletes. Give them credit, even when we played things just right, their athletes made plays.”

The Saints (1-3 overall, 1-1 in conference) started with a bang, completing a 42-yard pass on their first play from scrimmage. Three plays later Dayo Oye plunged into the end zone for a 1-yard touchdown as St. Croix Falls went up 7-0 with 10:40 left in the opening quarter.

C-W (0-4, 0-2) had somewhat of a promising drive on the ensuing possession. They converted on 3rd and 10 when junior quarterback Cade Johnson zipped a pass into a tight window to senior Tristan Wendt who hauled in the pass, broke a tackle and fought for a 22-yard gain. However, the the ‘Dogs turned the ball over on downs after the drive stalled out.

The Bulldogs’ defense showed resiliency during St. Croix Falls’ second drive, but the Saints started the second quarter with a back-breaking touchdown pass. The down and distance was and 3rd and 15 when Brady Belisle connected with Travis Oestreich for the 26-yard strike.

Trailing 14-0, C-W was forced to punt on its next possession.

Three plays later, the Saints four the end zone and scored. This time Belisle was under duress, rolled out to his left and heaved a perfect 22-yard pass to teammate Bryn Gouker for the touchdown to extend the St. Croix Falls lead to 20-0.

A nice kick return by C-W junior Lawson Davis gave the ‘Dogs good field position. Johnson completed a nice 18-yard pass to senior Ryan Smith as C-W knocked on the door of the red zone. But Johnson’s next pass was intercepted by a Saints defender thwarting the potential scoring drive.

On the very next play, Belisle cashed in on the C-W turnover with an 80-yard touchdown pass—his third of the quarter—to Oestreich as the lead reached 28-0.

St. Croix Falls went up 35-0 early in the third quarter when Oye broke seven tackles and rumbled 47 yards to pay dirt. Oye scored again later in the quarter on a when he caught a 20-yard touchdown pass from Belisle.

Down 48-0, the Bulldogs’ finally got on the board late in the fourth quarter when freshman James Chamberlain rushed for a 1-yard touchdown. Playing quarterback, Oscar Hernandez scored on the two-point conversion to make it 48-8 which was the final.

St. Croix Falls rushed for 250 yards and three scores; it was led by Oye who finished with 131 yards and two touchdowns on 14 carries.

Belisle was 6-9 for 261 yards and four touchdowns.

Johnson completed 4-11 for 74 passing yards. Smith caught two passes for a team high 39 yards. Wendt and Davis each had one reception for 23 yards.

The Bulldogs have another home game this week when they host the Bloomer Blackhawks (2-2, 2-0) who thumped Cameron 56-28 last week.

“This week we will be facing another big team in Bloomer. We will have to find a way to match their physicality,” coach Knickerbocker concluded.