Chris Slusar, of Evansville, has thousands of antique lures and fishing gear he’s collected over the course of the past 40 years, focusing mainly on Wisconsin-made lures. Slusar is hoping someone will be able to help him identify what he believes to be a lure made in the Chetek area, pictured above. The lure was most likely made in the 1930s or 1940s. 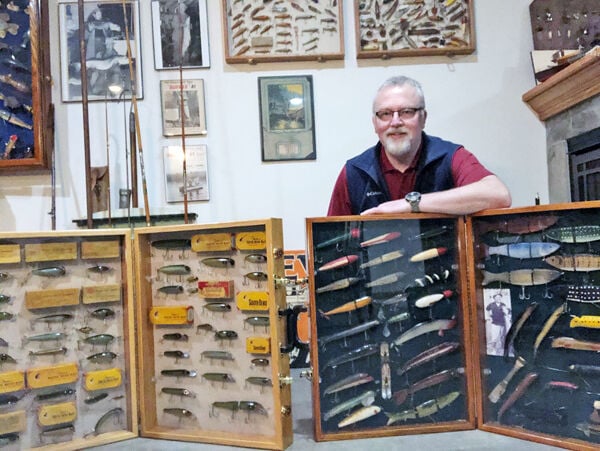 Pictured, Slusar poses with a few cases of his old lures, while numerous more hang in the background.

Chris Slusar, of Evansville, has thousands of antique lures and fishing gear he’s collected over the course of the past 40 years, focusing mainly on Wisconsin-made lures. Slusar is hoping someone will be able to help him identify what he believes to be a lure made in the Chetek area, pictured above. The lure was most likely made in the 1930s or 1940s.

Pictured, Slusar poses with a few cases of his old lures, while numerous more hang in the background.

Chris Slusar is not your average fisherman. Sure, he enjoys tangling with monster muskies, catching walleyes or filling the freezer with delicious panfish. As exciting as those fishing moments are, Slusar’s niche has taken him beyond the water.

The 54-year old researches and writes about old fishing lures and equipment he collects, particularly items made in Wisconsin. He’s been collecting fishing tackle and researching the related background for about 40 years.

Ample time is spent researching and investigating each specific lure or piece of equipment Slusar collects. Sometimes, it’s difficult to find the origin and background regarding certain items—like the Chetek-made bait (see photo above)—though he is hoping someone can help him identify it.

Slusar believes the particular lure in question comes from Chetek because several similar lures like this have been found in the Chetek area. However, no name or other identification has been attributed to the piece.

“I don’t know exactly what period it dates, although folks in lure collector community have referred to it as the ‘Chetek bait’. I’m really hoping someone sees this article and photo and recognizes it,” Slusar explained.

Slusar noted he was impressed by the fishing history in the Chetek museum and some of the displays he viewed when he and his wife were in the area searching for a cabin in 2007.

“I am aware that Heddon (James Heddon and Sons) had a factory in Chetek near the turn of the century, around 1906–1907. I know they manufactured rods and fishing equipment at the factory, but they relocated back to Michigan shortly after. William Heddon had a place in Chetek at the time. A variety of similar pieces have come out of the area, but no one seems to know the maker. This lure remains a mystery, at least for the time being,” Slusar said.

Slusar verified that there are different versions of this bait out there, but the lure is likely buoyant and runs sub-surface, maybe a foot or two under the water. Some have line ties in different positions, some are different sizes, some have feathers tied, where others have feathers glued to the hole on the back end of the bait.

Another bait that originated in the area, that Slusar discussed, is a lure called Vans Weedless. It is a chunk-style bait, that was apparently made by a boat builder in Chetek. A third bait with close ties is a unique fly lure that was made by Freeman Mikelsell, who has a distant family relative in the Chetek area, according to Slusar.

“That goes to point out you don’t have to go far in any part of the state to find lure history,” Slusar said.

The Wisconsin native was born with fishing in his blood. He grew up in Milwaukee and lived most of his adult life in Racine County. He is a corporate controller for a company in Beloit and he and his wife currently live in Evansville.

“I have always loved fishing and been a bit of a collector. Along with a keen interest in history, I suppose I was guided into collecting fishing memorabilia. For many years, my focus has been on Wisconsin made items. However, I have accumulated fishing tackle from around the country,” Slusar stated.

His collection includes lures, fish decoys, reels, rods, minnow buckets, tackle boxes, spears, gaffs and related items—thousands of pieces in total. Some of his collection is on display in his home in what Slusar refers to as the “lure cave”. The lure cave is a shrine to fishing tackle, mostly of Wisconsin, and cases of old lures line the walls.

“I do enjoy hosting and participating in fishing collectible shows, and will sometimes display my collection at these events. I also go to fishing expo’s and similar gatherings where I will create special displays for the public,” Slusar noted.

Slusar is an active member in the National Fishing Lure Collectors Club and hosts one of the largest collectible shows in the nation each year in January. The event in Milwaukee draws close to 250 members from around the country.

But beyond the passion for fishing and hosting collectible shows, Slusar is more fascinated by the historical aspect.

He invests an interest in each lure, but a stronger focus on the history of the lure or fishing gear. Connecting the lure to the inventor and designer is important to Slusar as knowledge of the people who made these antique lures has been lost over time.

“It’s pretty neat to find that connection. I made a determination that I wanted to dive deeper into history, make a connection to people making them and accurately identify antique lures and equipment,” Slusar stated.

The longtime lure collector added that he is hoping to publish something by next year that focuses on the actual lure making aspect, accurate identification of antique lures, and background stories to provide more details on models and people who developed the old fishing baits.

With thousands of baits and tackle in his lure cave, Slusar said it’s difficult to pick a favorite item. However, he noted a lure called “The Chippewa” was certainly in his top five.

“The Chippewa was made in Blair, and although there are different versions, the final version was made and designed between 1913–1915 by Omer Immell. We live in a big fishing state with lots of lure history. In fact, one of first patented wooden lures was made in Ashland in 1874, close to 150 years ago,” Slusar added.

Whether or not the public can help identify this antique Chetek-made lure remains a mystery. Regardless of the outcome, Slusar is likely to continue his quest for the answer.

“I’d be thrilled to get any information, but an I.D. on this bait would be fantastic. It’s a little bit of a needle in the haystack scenario. You’re talking about something that’s 70 years old or possibly older. There’s just not many people around from that era. I’ve followed little family trees of lure makers and spent hours doing so in hopes of more information like this. Sometimes I have success, and sometimes it’s a complete strikeout. I’ll keep my fingers crossed,” Slusar concluded.