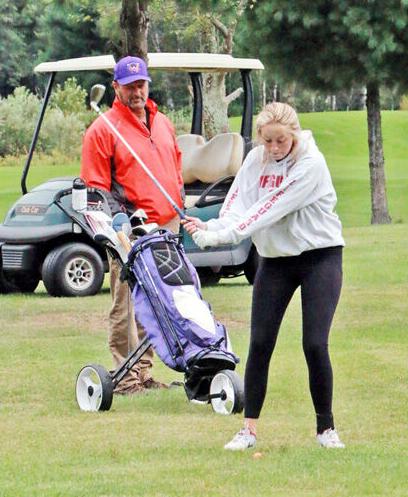 Pictured above, the Bulldogs’ coach Bill Munch watches on as Abbie Kane uses an iron to chip over the water hazard on hole No. 7 on Sept. 10. 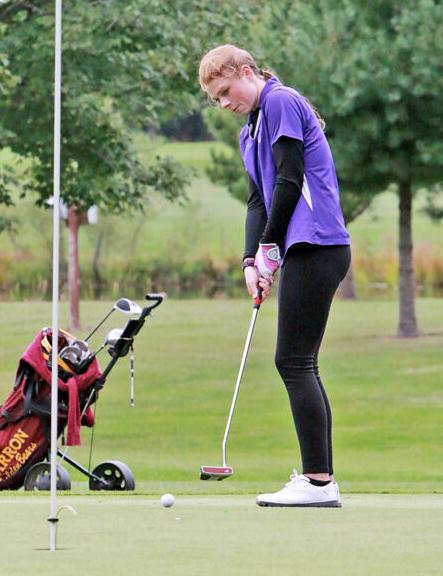 Pictured above, the Bulldogs’ coach Bill Munch watches on as Abbie Kane uses an iron to chip over the water hazard on hole No. 7 on Sept. 10.

This past week was a very busy one for the Chetek-Weyerhaeuser girls’ golfers as they competed in four meets in seven days.

The first match was at home against Barron on Sept. 8.

The Barron girls are showing much improvement and are near the top of the conference in wins. Claire Bartlett was the leader for the Golden Bears as she shot a 47. She was followed by teammate Kami Zurn, who got her round together after a rough start and shot 48.  Brooke Vergin’s 51 was another solid round for the Barron team.

On Thursday, Sept. 12, C-W traveled to Solon Springs for their only invitational of the year at Hidden Greens North—one of the toughest courses in this part of the state.  Samuelson and senior Kara Rasmussen both had a few bogeys on the front nine and managed to keep their rounds in the 50’s—an accomplishment on a course where scores typically are 5–10 shots more per nine holes than anywhere else. Barron won the team portion of the meet by having three girls shoot under 110.

The Bulldogs had three golfers in the 120s. Freshman Emma Haselhuhn played her first 18 holes and had a bogey, while Buchman had a par and two bogeys to keep her round in the 120s. Northwestern’s Mackenzie Tuura was the top medalist with a 93.

The C-W girls headed to Ladysmith to take on the skilled Lumberjills on Friday, Sept. 11. Led by senior Jackie Wallin, the Ladysmith girls shot a great round of 208 to win the match. Wallin had three pars to end her round with a 45, while teammate Kaitlyn Shott had a par and three bogeys to shoot a 49.

The long grass in the fairways were hard on the C-W team. Abbie Kane was low scorer this time with a nice round of 55 that included a par and a bogey. Samuelson continued her consistent play and had two pars with a 57. Lauren Hayes and Haselhuhn shot their personal best rounds with 63 and 64.

The girls competed at Luck-Unity-Fredric on Monday, Sept. 14, for their fourth match in a week—results from this match will appear in next week’s paper. C-W will host Saint Croix Falls on Friday, Sept. 18, and then heads to Northwestern on Monday, Sept. 21. The Heart O’North Conference Tournament is on Wednesday, Sept. 23.