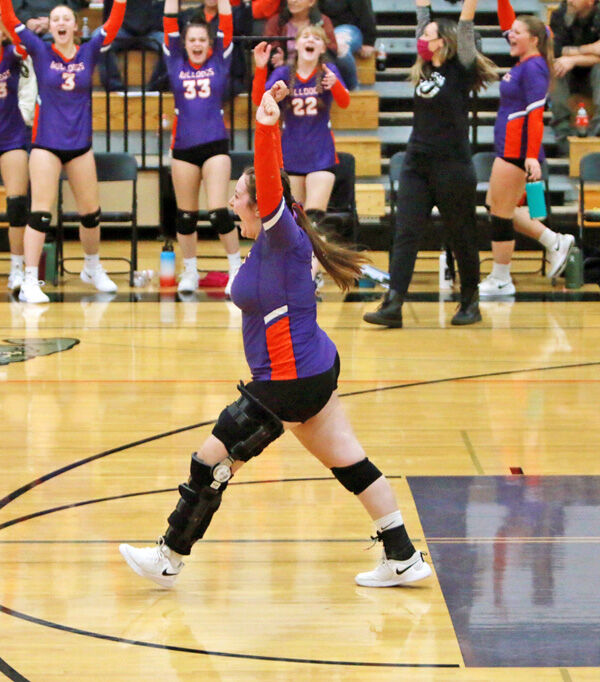 The lady Bulldogs volleyball team began the week with four consecutive wins, including conference victories over Spooner and Northwestern. It was a welcoming sight to see senior Kendall Evans, pictured, return to the lineup after suffering potentially season-ending knee injury earlier this season. She, along with her teammates and fans, celebrated during senior night after and ace serve. 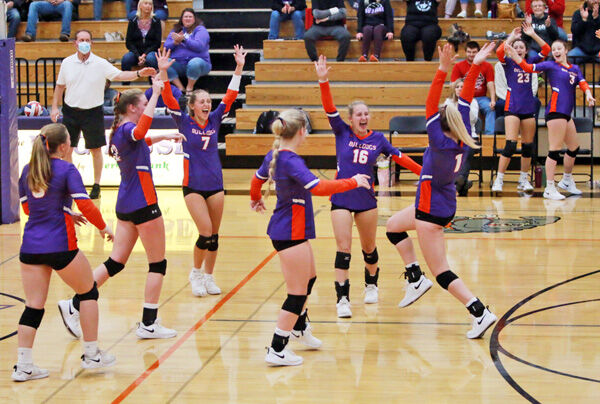 Pictured, the volleyball team cheers together after they earned a hard-fought point against the Barron Golden Bears on Monday, Oct. 11. 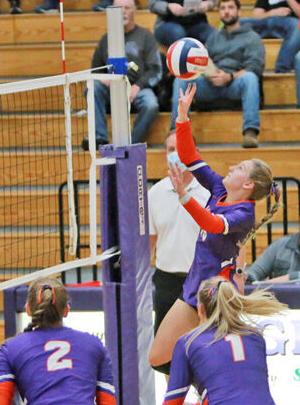 Pictured above is senior Kora Claflin tipping the ball at the net during Senior Night against he Barron Golden Bears on Monday, Oct. 11.

The lady Bulldogs volleyball team began the week with four consecutive wins, including conference victories over Spooner and Northwestern. It was a welcoming sight to see senior Kendall Evans, pictured, return to the lineup after suffering potentially season-ending knee injury earlier this season. She, along with her teammates and fans, celebrated during senior night after and ace serve.

Pictured, the volleyball team cheers together after they earned a hard-fought point against the Barron Golden Bears on Monday, Oct. 11.

Pictured above is senior Kora Claflin tipping the ball at the net during Senior Night against he Barron Golden Bears on Monday, Oct. 11.

The Chetek-Weyerhaeuser varsity volleyball team earned its first conference wins of the season last week, downing Spooner and Northwestern. They picked up two more wins over Amery and Northwood to make it four consecutive wins before the Bulldogs dropped the final three matches of a busy week on the court.

C-W started the week playing at Spooner on Tuesday, October 5. After starting the season 0-6 in Heart O’North play, the ‘Dogs picked up their first conference win, defeating the Rails in four sets. C-W won the first two sets by scores of 25-17 and 25-13.

“We had a great night of team volleyball, and very strong performances from our group of seniors,” explained C-W head coach Heather Bohl. “Mariah Bilodeau had some huge blocks and was very smart and aggressive offensively. Kora Claflin was all over the court in the back row. She did a fantastic job of reading the hitters and covering the deep corners and balls hit down the line. Greta Jorstad was nothing short of spectacular. She was seeing the court so well, and tore apart their defense. Spooner simply could not stop her.”

Jorstad also had a perfect night serving the ball with 7 aces on 33 attempts. Sophomore Mariah Mitchell was also perfect from the service line on 8 attempts, followed by Claflin and Bilodeau who both served 91.7% and each had 12 attempts. Jorstad posted a serve receive average at 2.40 (10 attempts), followed by Claflin at 2.28 (18 attempts) and junior Olivia Schofield at 1.81 (21 attempts).

Junior Sophie Nichols had a good night attacking at the net, hitting .105 (5 kills, 19 attempts), followed by Bilodeau at .100 (6 kills, 20 attempts) and Mitchell at .042 (6 kills, 24 attempts). Schofield also contributed 5 kills. Nichols led the ‘Dogs in assists with 21, followed by Jorstad with 15, Mitchell with 3 and freshman Taya Whittenbergerwith 1.

Leading the team in digs was Jorstad with 14, followed by Mitchell with 11, Schofield (10), Claflin (8), Nichols (7) and Bilodeau (4). Bilodeau also had a team-high in blocks with 3 and Jorstad also contributed 1 solo block.

The Bulldogs continued their winning ways during Parent’s Night when C-W hosted Northwestern on Thursday, Oct. 7. It took four sets to put away the Tigers with C-W taking the opening two sets 25-15 and 28-26. Northwestern responded with a 26-24 win in set three, but C-W crushed the visiting team 25-11 to win their second consecutive match.

“We played an exciting match on Parent’s Night and were well matched with Northwestern. We were happy to sneak senior Kendal Evans in to serve for us. Kendal has been out since the beginning of the season with a knee-injury, so it was amazing to get her on the court to serve for us. Kendal finished off the fourth set with an ace serve, a perfect way to end an amazing night of volleyball for us,” coach Bohl noted.

“Bilodeau was on fire offensively all night. She was extremely aggressive with the ball and found holes in the defense,” Bohl said.

Schofield had a team high 19 digs, followed by Jorstad with 13, Claflin and Mariah Mitchell each had 7 digs, Bilodeau and Nichols each had 5 and Jenson contributed 4.  Jorstad, Bilodeau, and  Nichols all finished with 2 blocks while Jenson had 1.

Playing in the Cumberland Tournament on Saturday, Oct 9, the Bulldogs won their first two matches over Amery and Northwood—making four wins in a row—but lost their final two matches to Ladysmith and Cumberland

On the defensive side, Mitchell and Jorstad each had 8 digs, followed by Schofield and Bilodeau with 7, Nichols with 4, Claflin with 3 and Jenson with 2. Bilodeau had the only block in the match.

The Bulldogs blanked Northwood in their second match of the day, winning 25-14 and 25-16.

Olivia Schofield led the team in digs with 10, followed by Jorstad with 8, Claflin and Mitchell with 5 each and Nichols with 2.

Playing in the undefeated Gold Bracket, the Bulldogs were bested in two sets by both Ladysmith and Cumberland

Against Ladysmith, the Lumberjills won the first two sets by scores 25-22 and 25-20.

Jorstad posted the team’s top hitting percentage and kills (.231, 9 kills), followed by  Bilodeau (.167, 2 kills). Schofield and Nichols also each contributed 2 kills. Jorstad and Nichols each had 6 assists, followed by Claflin with 2 and Schofield with 1.

Schofield and Claflin had a team high 8 digs apiece, followed by Mitchell with 5, Bilodeau with 4 and Nichols and Jorstad with 3 each. Clafin and Bilodeau both finished with 2 blocks

Claflin led C-W in hitting percentage at .500 (2 kills, 4 attempts), followed by Schofield at .071 (team high 4 kills, 14 attempts). Jorstad and Bilodeau also contributed 3 kills each, followed by Mitchell and Jenson with 1 each. Jorstad had five assists, followed by Nichols with 4, Claflin (2) and Olivia Schofield (1).

Jorstad led the team in digs with 11 while Claflin (9), Schofield (6), and Mitchell (5) all contributed. Mitchell, Jorstad and Bilodeau each finished the match with 1 block.

“It was a fun night, especially for our seniors: Jorstad, Evans, Bilodeau and Claflin. Our four seniors have committed their time in high school to the game of volleyball and to their teammates. All four seniors have played club volleyball and have worked tirelessly in the off-seasons because of their love of the game. Throughout their years in high school, they have demonstrated leadership, loyalty, passion, hard work and resiliency, all while representing our school and volleyball program with class, dignity and great sportsmanship,” coach Bohl stated.

Jorstad finished with 11 digs, followed by Mitchell with 9, Claflin (8), Schofield (6), and Bilodeau (5). Jorstad led the team in blocks with 2, followed by Schofield and Claflin with 1 block each.

With the WIAA regional semifinals scheduled for Tuesday, Oct. 19, the Bulldogs will find out where and who they play during the seeding meeting on Wednesday, Oct. 13. If C-W wins on Oct. 19, they will play again on Thursday, Oct. 21.