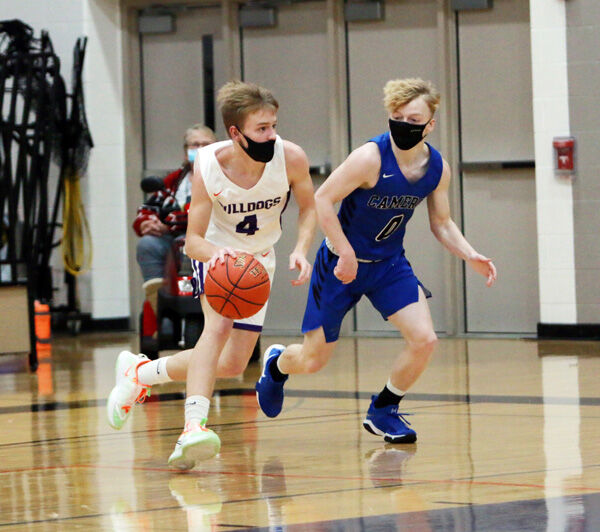 The Bulldogs boys’ basketball team was defeated at home 87-46 by Cameron, 87-40 at Northwestern and 79-36 at Cumberland last week. Pictured above, senior Ethan Bowe dribbles past a Cameron Comet defender on Jan. 5. 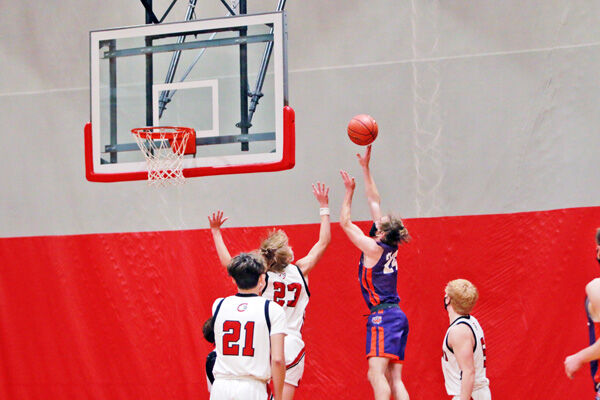 Pictured above, senior Joseph Jensen shoots a turnaround jumper against the Beavers on Saturday, Jan. 9. Jensen led the Bulldogs with 10 points and five rebounds in the loss.

The Bulldogs boys’ basketball team was defeated at home 87-46 by Cameron, 87-40 at Northwestern and 79-36 at Cumberland last week. Pictured above, senior Ethan Bowe dribbles past a Cameron Comet defender on Jan. 5.

Pictured above, senior Joseph Jensen shoots a turnaround jumper against the Beavers on Saturday, Jan. 9. Jensen led the Bulldogs with 10 points and five rebounds in the loss.

Coming off of the holiday break, the Chetek-Weyerhaeuser boys’ basketball team slipped to 0-7 on the season after they were downed by Cameron, Northwestern and Cumberland last week.

C-W (0-7 overall record, 0-7 conference record) opened the week at home against the Cameron Comets (8-1, 4-0) in a game where the visitors stormed out to a massive 59-20 lead at halftime and never let off the gas pedal on Jan. 5. It was another cold-shooting night for the Bulldogs, who were bested 87-46.

“They played like a hot knife offensively and we were the butter. We couldn’t match their seniors’ experience and play making. All three of the big scorers had completely different bodies from being in the weight room since we saw them last year,” stated C-W head coach Hans Olson.

Cameron thrived on the fast-paced first half, pushing the ball up the court as fast as they could, which led to numerous lay-ups on the offensive end for the Comets.

By halftime, the game was all but over as Cameron led by 39 points.

Richie Murphy paced the Comets with 18 first-half points, followed by Ian Payne with 13 points and Austin Weis with 12 points.

C-W senior Joseph Jensen scored seven points in the opening 18 minutes, while junior Ashton Kummet had a pair of three-pointers and chipped in six points.

With a monster lead, the Comets remained in cruise control for the second half, although they did slow the pace of the game down, working more on their half-court offense. C-W found a little more success in the second half with 26 points, including four shots from downtown.

The Bulldogs were outscored 72-20 inside the paint and C-W committed 27 turnovers, compared to 16 by the Comets.

Coming off the loss to Cameron, C-W made the long trek to Northwestern (7-3, 6-0) where the Tigers obliterated the Bulldogs 87-40 on Thursday, Jan. 7. The Tigers had 12 different players score in the game, including five players in double figures. C-W had just six players tally points and just one in double digits.

Northwestern’s intense full-court defense rattled the ‘Dogs all night, especially early on. By halftime, the Tigers had built a 59-20 lead—the same deficit the Bulldogs faced two days prior against Cameron. Forcing 28 turnovers and converting on high-percentage shots all night long made for a daunting task for C-W.

“Northwestern is a good, young team, who is very physical. Once we adjusted to the speed they were playing, we settled in a little better, but it was too late. We had numerous open looks, that didn’t fall,” coach Olson stated.

C-W was outscored 28-20 in the final 18 minutes as the Tigers worked in several bench players.

Northwestern’s Monte Mayberry finished with a game high 20 points, along with 13 rebounds.

C-W’s tough week continued as they headed to Cumberland on Saturday, Jan. 9, where the Beavers returned several athletes to the team after being quarantined. C-W struggled offensively and was only able to muster 19 points in the first half and 17 in the second half. In the end, the Beavers clobbered the Bulldogs 79-36.

“Our zone defense held for a bit in the first half, but we were having a tough time converting makes offensively. Cumberland is another veteran team who just wouldn’t be denied, and unfortunately, we couldn’t answer,” Olson said.

C-W trailed 10-6 after six minutes of play, but the Beavers’ offense eventually started clicking on all cylinders, taking a 41-19 lead into halftime.

With a comfortable lead, Cumberland added a barrage of three-pointers in the second half to put the ‘Dogs away.

“Moving forward, we’ll continue to work on fundamentals of the game and bring up the intensity of our practices so we can match the experience we’re competing against on game nights,” coach Olson noted.