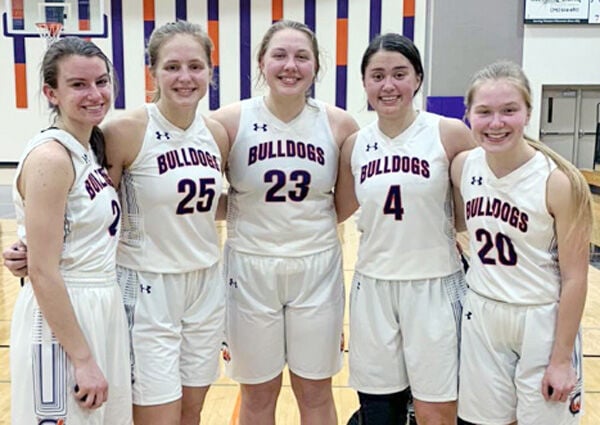 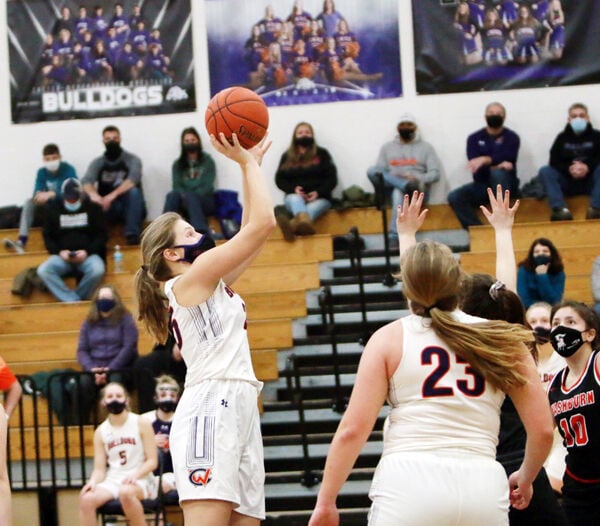 Pictured, Schofield shoots an open shot in the final game on her home court on Feb. 9. Schofield scored 10 points against Washburn and a career high 33 points at Phillips. 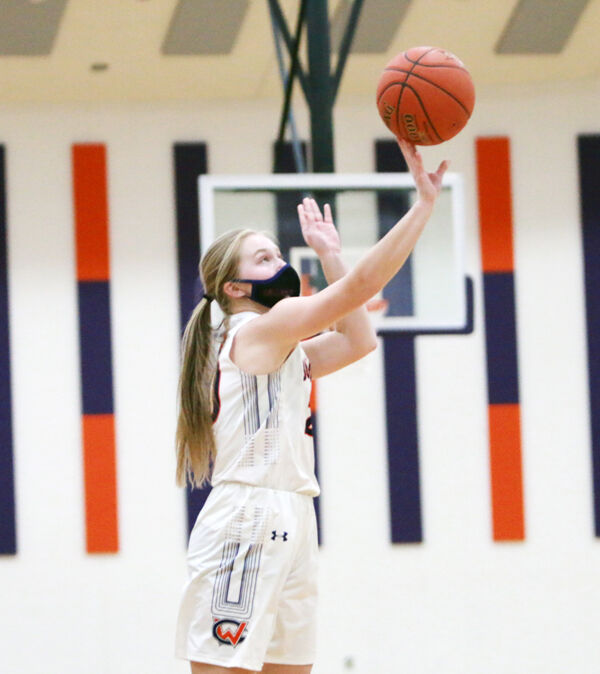 Pictured, senior Rebecca York shoots a three-pointer in the second half during the Bulldogs’ 72-28 win over Washburn on Feb. 9. 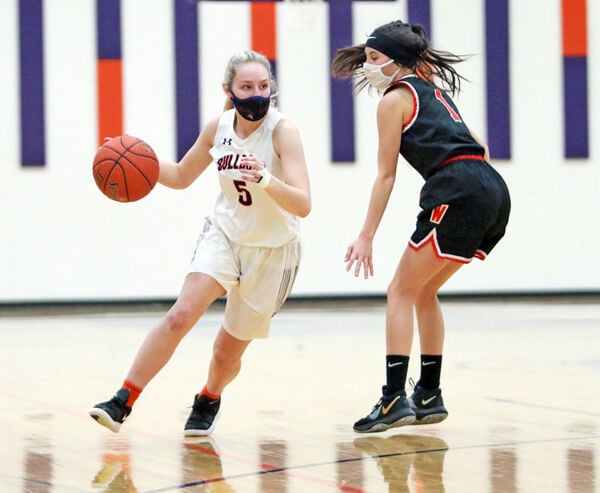 Pictured, junior Kora Claflin drives past a Castle Guards’ defender. Claflin finished the game with six points on a pair of three-pointers.

Pictured, Schofield shoots an open shot in the final game on her home court on Feb. 9. Schofield scored 10 points against Washburn and a career high 33 points at Phillips.

Pictured, senior Rebecca York shoots a three-pointer in the second half during the Bulldogs’ 72-28 win over Washburn on Feb. 9.

Pictured, junior Kora Claflin drives past a Castle Guards’ defender. Claflin finished the game with six points on a pair of three-pointers.

The lady Bulldogs basketball team snapped an eight-game losing streak with a 44-point win over Washburn in the first round of the Division 4 WIAA 2021 Girls Basketball Tournament. However, Chetek-Weyerhaeuser lost 82-73 to Phillips three days later to end the season for the ‘Dogs.

C-W stormed out to a big lead early and never looked back with 46 points in the first half—the most points they’ve scored in any half this year. By halftime, the Bulldogs were already looking ahead to their next game as they led 46-14. C-W’s defense put the clamps on the Castle Guards all night, holding Washburn to just 14 points in both the first and second half.

“In a game where our opponent was severely overmatched due to just being able to play three games all year, our goal was to try and work on some things to prepare us for the next playoff game. We added in a new out of bounds play, added in a couple of wrinkles on our zone offenses, and really wanted to work on better footwork on defense and not getting into foul trouble,” C-W head coach Patrick Boughton said.

The Bulldogs’ suffered their season-ending loss when they traveled to No. 1-seeded Phillips (18-1, 11-0), falling 82-73 on Friday, Feb. 12. Despite the loss, C-W played arguably their best game of the season against one of the top teams in the region. They battled back from large deficits throughout the game but came up a bit short.

“Playing against a team that featured three guards that could all shoot the ball well, I was proud of our girls and how they responded several times throughout the game. We found ourselves down several times in the first half by 30 points and our girls could have just succumbed to them, but they chose to be resilient and started chipping away at the score closing it to within 16 by halftime,” coach Boughton explained.

Again in the second half, Phillips went on a little run pushing the score back up close to a 30-point lead, but the C-W girls did a great job of showing resiliency. They continued to get stops and were able to find some success in their transition offense.

“We were able to convert from the free throw line down the stretch and pulled to within nine points with just over 30 seconds to go,” Boughton noted.

C-W started out slow and trailed 21-7 seven minutes into the game. The Loggers extended their lead to 30 points with just minutes remaining in the half, but the ‘Dogs went on a 9-0 run and trailed 44-28 going into halftime.

Schofield led C-W with 11 points (8-8 free throws) at the break, while Haas had a pair of three-pointers and Sather scored three two-point field goals. Timm added four points, including one shot from beyond the arc.

The Bulldogs cut the Loggers’ lead to 14 points to start the second half, but quickly found themselves down by 30 points, 71-41, with nine minutes remaining in the game.

The Bulldogs went on a 32-11 run to end the game but were unable to complete the storybook comeback.

“When you look at the game from a statistical standpoint, we may have played our best overall game against a No. 1 seed opponent. We shot 41 percent from the field, but shot almost 50 percent (9-19) from three-point range. Were also shot 82 percent (22-27 from the charity stripe and we only turned the ball over 12 times. I was proud of our overall performance against a very good opponent who has a very good chance of making it to the state tournament,” coach Boughton said.

Schofield poured 22 points in the second half and finished with a career high 33 points (3-3 on three-point attempts, 16-17 free throw attempts). She also tallied eight rebounds, four steals, three assists and two blocks. Haas had four three-pointers and finished with 12 points, three boards and two assists. Timm also had 12 points to go with three assists. Bilodeau grabbed a team high nine rebounds and added two points and a pair of steals.

“When you look at all of the obstacles that were presented to this team and then look at the character of the girls on this team, you ask yourself if things played out differently, and things lined up a little more favorably for them, what could they have accomplished? I personally believe we could have been a sectional level team,” coach Boughton stated. “We asked these girls to learn a new system, new terminology, and a new coach in five days and then we turned them loose against one of the toughest conferences in the state where eight of the 10 teams play at the Division 3 level, while we play Division 4. We struggled coming out of the gate and started the season 0-4, but we were in all four of those games. We then got our feet underneath us a little bit, winning five of our next seven games with wins over Cameron, Spring Valley, Spooner, and Cumberland. We then hit a month long stretch missing a starter and our wheels came off as we finished our regular season 0-8. We were able to get everyone back for the playoffs, had a little time to work on some things and get rested then we won our first home playoff game since 2018 and then gave the number one overall seed a little bit of a sweat down the stretch. I would definitely have to commend this team for the adversity they were able to play through, the perseverance they had to display to get through it, and the work ethic to make it possible.”

Coach Boughton went on to thank the five seniors—Schofield, Haas, Timm, Sather and Rebecca York—for their hard work and dedication to the program.

• Madison Haas: “Here is a point guard who had always played for her father and in her final season had to go out there with a different co-pilot for the first time. I am sure it wasn’t always easy, but Madison did it with class and continued to improve each game she played. During the playoffs, Madison shot 47 percent from the field, and 44 percent from beyond the three-point arc. She scored 25 points, which is a great way to finish her career. We wish her the best as she continues to go to school and works her way into the medical field.”

• Maggie Timm: “Our senior shooting guard, who coming in, had the playing experience of someone two years younger then herself due to battling two different knee surgeries in her high school career. I assured her at the beginning of the year, you can only control what you can control. You can’t play basketball with a ‘what if’ attitude, you just have to have a positive attitude and go play and the chips will fall, however they fall. I think Maggie did a great job of doing just that. In practice, I often referred to her as the bull in the China Shop—once she makes up her mind to do something, she is going to attempt to do just that, no matter who is in her way. Like Madison, Maggie finished her career on the rise. During the playoff run, she shot 39 percent from the field, 40 percent from beyond the arc and 88 percent from the free throw line, finishing with 24 points in the playoffs. We wish her the best as she heads off to college.”

• Rebecca York: “Another one of our senior guards, Rebecca was more of the defensive-minded guards. When Becca was on the court, many times she was given the tough duty of defending the opposing teams’ top guard or being asked to pressure the opponents’ guard full court in an attempt to try and wear them out. Becca is one of the players people don’t hear much about because her efforts don’t always show in box scores, but it is a very important member of the team for what she does while she is on the floor. She did come up big for us several times in the playoffs, as she had several key steals and rebounds in crucial moments trying to keep our season alive. We wish her the best as she decides which college to attend.”

• Emma Sather: “She is probably the strongest player, physically, that I have ever coached in girls basketball, and we attempted to use that as a team strength this year pounding the ball inside. Emma showed great potential this season as she scored 15-plus points on five different occasions and 10-plus points on 11 different occasions. She finished just three rebounds shy from leading the team as she was able to pull down 130 of them on the season. Emma finished her senior run by shooting 75 percent from the field and scoring 26 points in the playoffs. We wish her the best as she chases future college endeavors.”

• Madeleine Schofield: “A versatile player that can play in the post or on the perimeter, Madeleine emerged this year as our most consistent scoring threat. She scored 20-plus points on three different occasions, she scored 15-plus points on seven different occasions and at least 10 points on 14 different occasions on her way to a team-best 278 points. She also led the team with 133 rebounds. Madeline finished her season in the playoffs shooting 35 percent from the field, 60 percent from beyond the arc and 84 percent from the free throw line for 43 points in the playoffs. We wish her the best as she looks to find a college that has a great accounting program and maybe even a basketball program.”

“All of our seniors will be missed. They were great players to be around, and they are greater people to be associated with. It was a fun year together,” coach Boughton ended.