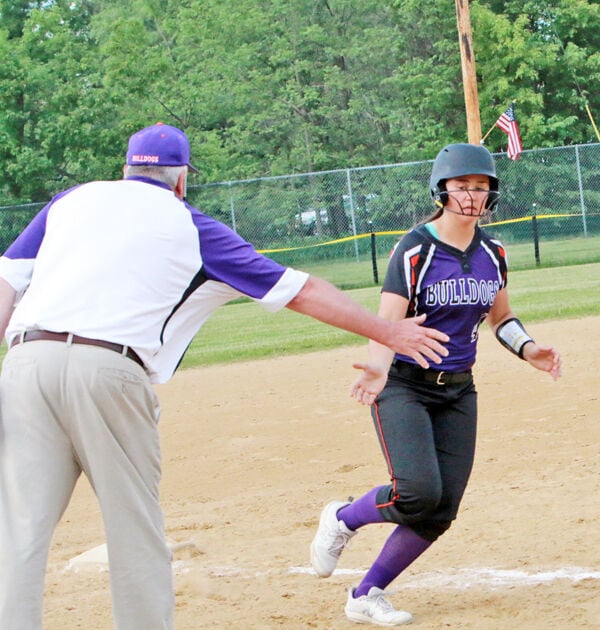 Pictured above, C-W head coach extends a high-five to senior Maggie Timm after she crushed a two-run home run in the fourth inning  during the Bulldogs 7-6 comeback win over Northwestern on June 1. 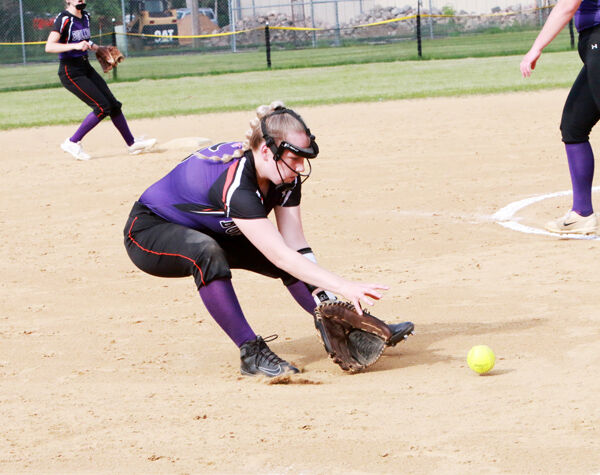 Pictured is senior Sydney Antczak fielding a ground ball at third base.

Pictured above, C-W head coach extends a high-five to senior Maggie Timm after she crushed a two-run home run in the fourth inning  during the Bulldogs 7-6 comeback win over Northwestern on June 1.

Pictured is senior Sydney Antczak fielding a ground ball at third base.

With the WIAA Division 4 2021 Girls Softball Tournament set to begin next week, the lady Bulldogs are peaking at the right time. Chetek-Weyerhaeuser saw its winning streak reach a season-high five games as they won three out of four games last week.

Leading 1-0, C-W extended its lead to 4-0 with a two-run single by senior Sydney Antczak, along with a wild pitch by the Saints.

Sather helped her own cause with a two-run home run in the top of the fourth inning. C-W added five more runs in the next three innings as they cruised to the 10-run victory.

Sophomore Sophie Nichols led the Bulldogs at the plate, going 2-3 with three runs and one RBI. Antczak was 2-4 with two RBIs and a run. Sather was 1-5 with a pair of RBIs and one run.

C-W had an amazing come-from-behind victory over Northwestern (16-4, 14-4) on Thursday, June 3, when the Bulldogs defeated the Tigers 7-6 in entertaining fashion.

“Northwestern was a huge win for us and a total team effort. Our girls really came to play. When this year’s seniors were freshmen, we beat them up in Northwestern, so it was nice to beat them here as seniors,” stated C-W head coach Randy Books.

Things appeared bleak for the Bulldogs as they trailed 6-1 after three innings of play.

However, the ‘Dogs clawed their way back with three runs in the fourth inning—two of which came on a timely two-run homer by senior Maggie Timm.

C-W senior Madeleine Schofield’s two-run double in the fifth inning tied the game at 6-6. She added the eventual game-winning RBI single in the sixth inning with two outs.

Sather retired the Tigers in order 1-2-3 in their final at-bats to give the Bulldogs their fifth straight win.

In seven innings on the mound, Sather allowed five earned runs on six hits and six walks. She struck out seven Northwestern batters.

Nichols went a perfect 4-4, including a trio of singles and one double. She also scored three times. Schofield was the only other C-W player with multiple hits, going 2-3 with three RBIs.

C-W’s five-game winning streak came to an end when it hosted Cornell/Lake Holcombe (14-3, 9-1) on Saturday, June 5. The Bulldogs struggled offensively, and despite a valiant last-inning comeback attempt with six runs in the seventh inning, the Knights hung on for the 9-7 win.

With the game tied at 1-1 after one inning, Cornell/Lake Holcombe quickly built a commanding lead. The team scored two runs in the second inning, four in the third and one run in both the fourth and fifth innings as it extended the lead to 9-1.

Down to the final three outs, the Bulldogs rallied to score six runs in the bottom of the seventh inning, although it was a “too little too late” scenario.

Senior Madison Haas started the rally with an RBI triple, while Nichols plated Haas with an RBI single. A two-run home run by Sather cut the lead to 9-5, followed by a two-run single by Marissa Zelek to make it 9-7. Unfortunately, C-W could not complete the magical comeback and stranded two runners on base in its final at-bat.

Antczak led the ‘Dogs with three hits in four plate appearances and scored once. Nichols, Haas and Timm each had two hits. Sather was 1-4 with three RBIs and one run.

“Our bats were silent until the bottom of the seventh inning. We just couldn’t get the big hit when we had runners on base,” coach Books noted.

Sather allowed five runs on five hits and eight walks. She struck out 12 and walked eight.

The Bulldogs plated four runs in the bottom of the first stanza, compliments of a walk-in run, a two-run double by sophomore Olivia Schofield and an RBI single by Antczak.

Five more runs in the third inning, including home runs by Sather and Olivia Schofield, and three runs again in the fourth proved more than enough for the ‘Dogs to earn their 11th win of the season.

The Bulldogs racked up 15 hits, including three hits from Nichols, Timm and Olivia Schofield—Schofield was 3-3 with a team high five RBIs. Timm and Nichols were both 3-4 with three RBIs and two runs.

“We hit the ball hard and made the defensive plays when needed,” Books said.