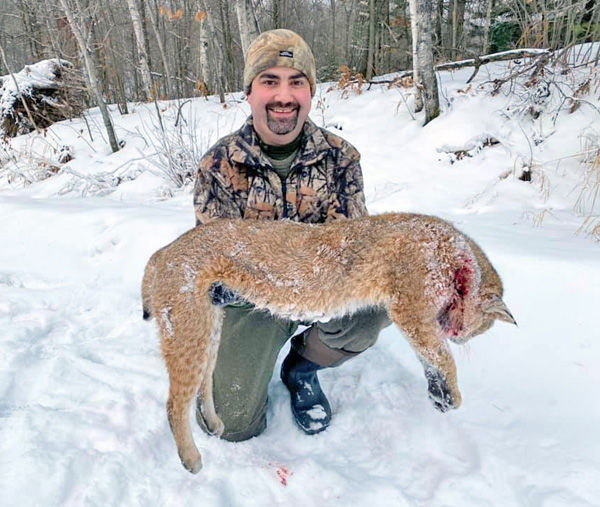 Two area residents filled their bobcat tags last week after fresh snow made for ideal hunting conditions with trained dogs. Pictured above is Chetek resident Ryan Gonzales with a 27-pound female bobcat he harvested on New Year’s Eve north of Weyerhaeuser. It took Gonzales 11 years to draw his bobcat tag. 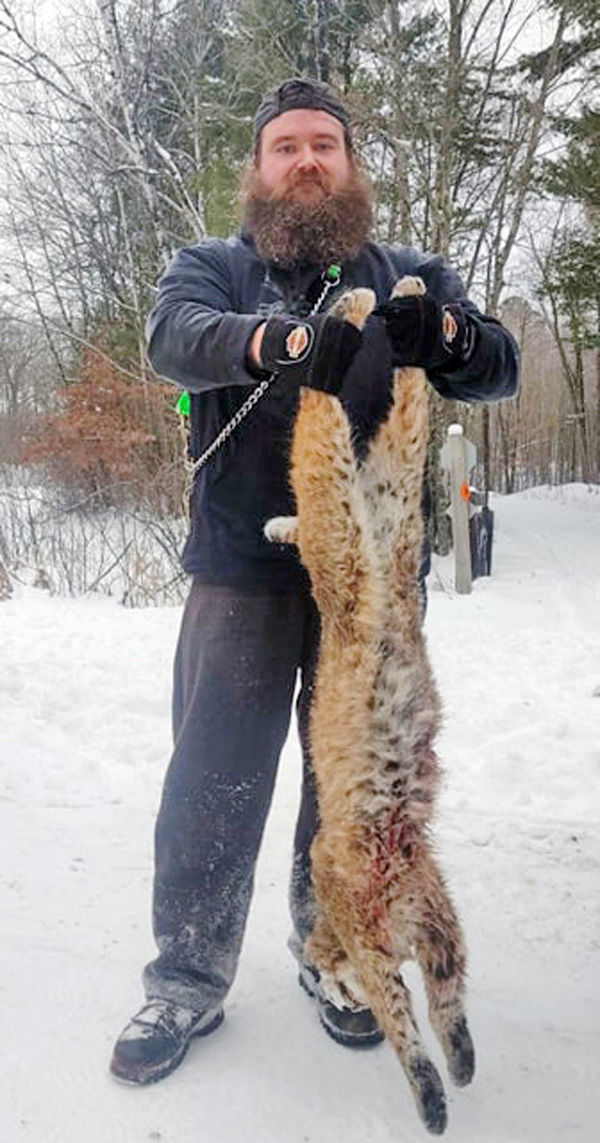 Pictured above is Ross Peters, of Wickware, who tagged the second bobcat of his hunting career—a 25-pound female—while hunting in Barron County on Saturday, Jan. 4. It also took 10-plus years for Peters to draw his 2019–2020 bobcat tag.

Two area residents filled their bobcat tags last week after fresh snow made for ideal hunting conditions with trained dogs. Pictured above is Chetek resident Ryan Gonzales with a 27-pound female bobcat he harvested on New Year’s Eve north of Weyerhaeuser. It took Gonzales 11 years to draw his bobcat tag.

Pictured above is Ross Peters, of Wickware, who tagged the second bobcat of his hunting career—a 25-pound female—while hunting in Barron County on Saturday, Jan. 4. It also took 10-plus years for Peters to draw his 2019–2020 bobcat tag.

It may have taken more than 10 years to draw a tag, but two local residents fulfilled bucket-list hunts last week as both successfully harvested a bobcat.

Chetek resident Ryan Gonzales had applied for a bobcat tag for 11 years when he received a notice in the mail back in October, stating he would be able to hunt bobcat, one of the stealthiest and most highly skilled predators in Wisconsin, despite being the smallest of the three wildcats found in Wisconsin.

On New Year’s Eve morning (Dec. 31), Gonzales’ dream hunt unfolded before his eyes and was over in just over an hour.

Hunting with Weyerhaeuser resident Andrew Boortz and his trained dogs, Gonzales; his father, Rob; and Boortz saw ideal conditions for Ryan’s first bobcat hunt as fresh snow had fallen the night before—although Gonzales noted it was relatively windy that morning, which covered fresh tracks with snow in a short amount of time.

Once the dogs picked up a fresh bobcat track, the hunt was on. Just before 8:30 a.m., the dogs treed the cat and Gonzales made a lethal shot on a 27-pound female bobcat.

“Yep, it was my first time out. There is a reason why you hunt with the best,” Ryan said while laughing after he was asked if it was the first bobcat hunt of his life. “I’m going to get a full-body mount at Gram’s Taxidermy in Springbrook, which is by Hayward.”

“It all started with an early alarm clock, at 3:30 a.m. We headed up to the Blue Hills looking for bobcat tracks crossing the road. Once we found a fresh one, we waited it out until it began to get light and hunting hours were open,” Peters recalled.

Eric, who is a hound hunter, walked a couple of his dogs in on the track and released them.

Peters noted that the dogs had a little trouble at first, but Eric was able to get the dogs in the right direction and the chase was on.

“One of the keys to bobcat hunting is, when you jump the cat and it starts running, you need to get in on the circle. Bobcats tend to use their same trench (in the snow) to try to deceive whatever is after them. Well, I was unable to get into the circle in time, but I was lucky enough these were a couple well-trained dogs. They were able to keep the bobcat running and ended up treeing it 580 yards from a trail I was on—that’s a long walk in snowshoes and a swamp, but I made it and was able to harvest my second bobcat. It crossed my mind to pass on it, but it took 10 to 12 years to draw a tag, so when the opportunity was there, I took it.

Peters harvested his 25-pound female bobcat at about 9 a.m. the morning of Jan. 4.

Although most bobcats are roughly 20 to 30 pounds, the highly skilled predator is capable of taking prey as large as adult whitetail deer.

Bobcats were targeted by bounties and unregulated hunting and trapping as recently as 1970, but the bobcat continued to survive and adapt.

Today, Wisconsin is home to a robust population of bobcats. The Department of Natural Resources estimates 3,500 bobcats live north of Hwy. 64, while southern Wisconsin has a sizable number of bobcats that is now being closely studied. Bobcats are found in all 72 Wisconsin counties.

The animal’s common name comes from its short, or bobbed, tail, which is very helpful to differentiate it from the largest native cat in North America, the mountain lion.

One of the keys to the species’ survival and growth is its adaptability to habitats ranging from coniferous swamps in the north to oak savannah in the south. Its list of prey items is broad, too, from insects to mice to deer.

Sorry, there are no recent results for popular images.