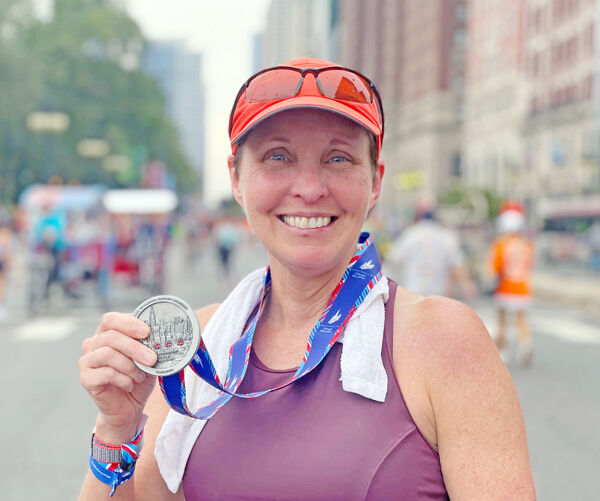 Elizabeth (Fredrickson) Miller, a 1988 Chetek High School graduate, is on a mission to complete the Abbott World Marathon Majors, which consists of six prestigious races and is a feat only 7,126 people (roughly 600 U.S. women) in the entire world have accomplished. Pictured, Miller poses with her medal from the Chicago Marathon on Oct. 10. 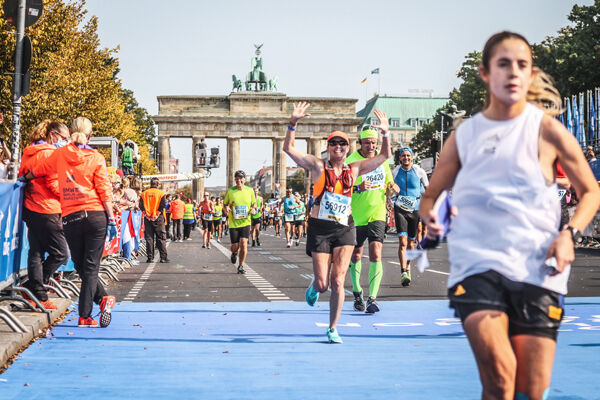 Pictured, Miller crosses the finish line of the Berlin Marathon after running through the Brandenburg Gate. Miller is the daughter of Chetek residents Harold and Gail Fredrickson.

Elizabeth (Fredrickson) Miller, a 1988 Chetek High School graduate, is on a mission to complete the Abbott World Marathon Majors, which consists of six prestigious races and is a feat only 7,126 people (roughly 600 U.S. women) in the entire world have accomplished. Pictured, Miller poses with her medal from the Chicago Marathon on Oct. 10.

Pictured, Miller crosses the finish line of the Berlin Marathon after running through the Brandenburg Gate. Miller is the daughter of Chetek residents Harold and Gail Fredrickson.

Elizabeth (Fredrickson) Miller’s desire and passion for running was in the small town of Chetek in the late 1980s. The Chetek graduate—class of 1988—has certainly kept her competitive racing edge into her adult life. If she accomplishes her goal and completes two more marathons, she will finish what is known as the Abbott World Marathon Majors, a feat only 7,126 people in the entire world have accomplished.

Miller, who is the daughter of Chetek residents Harold and Gail Fredrickson, recently checked off two of the six prestigious races in the months of September and October.

“Running in high school built a base for a lifelong love of running. I am currently in the process of completing the Abbott World Marathon Majors, which which consists of six races. I have completed the Boston Marathon (2016), New York City Marathon (2019), and recently completed the Berlin Marathon in Germany (9/26/21) and the Chicago Marathon (10/10/21) only two weeks apart. Still to come are the London and Tokyo marathons,” Miller explained.

Miller ran track and cross country under Bruce Kamrath and the late Dan Conway. From there, she ran at Luther College in Decorah, Iowa, while continuing her education.

Currently living in De Pere and working as the Director of Finance at St. Norbert College, Miller loves the fact that her desire to run is taking her around the world.

“Running the World Marathon Majors gives me the ability to do what I love while seeing places I would not otherwise go. I believe there are just over 7,000 people in the world who have completed all six races, about 600 of them are women from the U.S.,” Miller explained. “And to top it off, you get a special medal after you complete all six. And what runner doesn’t want another medal! The races are not all easy to get into.”

Miller was able to enter Boston, New York and Chicago with fast qualifying times she had run at previous races. She was then lucky enough to get picked in the lottery to race in Berlin in September.

“I have entered the lottery for London for next year but that, and Tokyo, are very difficult to enter through lottery spots. I may need to look into other options such as tour operators or charity bibs. A charity bib is one that is provided to you through a charity for which you agree to raise a set amount of money in order to run the race,” she said.

Miller stated that another big goal she has is to run in the Marine Corps Marathon.

“My dad, Harold Fredrickson, was a marine and my dream is to finish that race which ends at the Marine Corps War Memorial in Arlington and have him there at the finish, so I can put that medal around his neck because he deserves it way more than I do,” Miller exclaimed.

Miller attributes her running success to growing up in Chetek, recalling track and field days in grade school when she realized she was a speedy sprinter.

“I ran cross country at the encouragement of Mr. Conway and Mr. Kamrath, and I owe so much to both of these men. I didn’t always love running the distance, but I loved being a part of the team. To this day I can still remember runs with my teammates on the trail behind the school. When I run in the fall and smell the leaves, it brings me right back to those days, I can hear everyone’s laughter and see their faces.”

Competitiveness is what used to drive Miller to run, seeing how fast she could be and trying to achieve age-group awards in my races. She admitted that has changed as she has gotten older, currently 51 years old.

“I have gained some great friendships through running and getting out for runs with my friends is one of the best parts of my week. I also like to plan races with my friends when possible. We will sometimes travel together or will do long relay-type races (like the Door County Fall 50) as a team. Let’s face it, life can be challenging, and what running really gives me is an outlet to relax, release some of that stress and focus on all that is good in the world,” Miller stated.

Training for the prestigious races is not for the faint of heart, but Miller noted that her goals will fluctuate, depending on the race. If her goal is to achieve a fast time, she follows a pretty strict plan that has her running 5–6 days a week, with lots of mileage and a variety of strength, speed and long workouts. However, if she is struggling with an injury or simply wants to be able to complete the distance, Miller will follow a more relaxed plan, running 5 days a week with less mileage and less strenuous workouts.

“I am an early morning runner, so I am usually out the door by 5 a.m. when I am training,” she added.

When reflecting on her achievments and future goals, Miller recalled a couple of her favorite memories from running.

“Running in the 200-meter final at the state meet my senior year in high school is something that I will never forget. I swear I can still hear my mom yelling for me! In my adult life it would have to be my recent trip to Berlin. Turning the last corner and seeing the Brandenburg Gate in front of me brought tears to my eyes. The history of Berlin makes that marathon so special and I couldn’t believe I was actually there and that I was just minutes away from finishing the Berlin marathon,” Miller said. “What I love about running is that it is a lifelong sport. It has given me so much through friendships and experiences and has gotten me through some pretty tough moments in life. Everyone can run. If you put on a pair of running shoes and step out that door, you are a runner,” Miller concluded.

It’s amazing how many life-changing moments have been created in Chetek.

Miller’s parents, former coaches, teammates, classmates and the Chetek community should be proud to see an alumna succeeding in life and wish her nothing but the best in her quest to complete the  final two marathons.

Below is a link to the statistics of the Six Star Finishers Hall of Fame, anyone who has completed all six races and those who have just one race left to complete https://www.worldmarathonmajors.com/six-star/hall-of-fame.