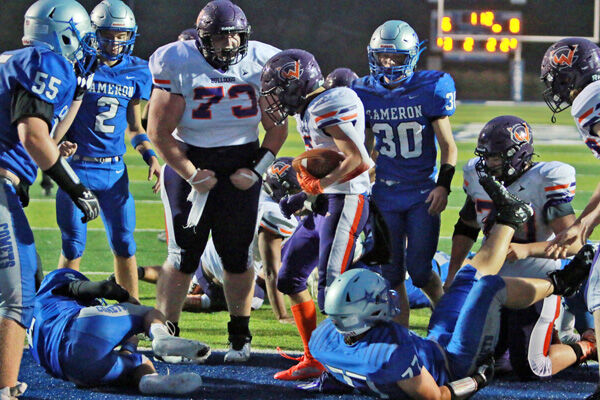 Chetek-Weyerhaeuser had its opportunities to defeat the Cameron Comets on Friday, Sept. 3, but the hometown Comets prevailed down the stretch and hung on for a 14-12 victory. Pictured above is senior Carter Kummet standing in the endzone after he steamrolled over a Cameron defender and plunged across the goal line behind a nice block from teammate and C-W center Vinny Murray (No. 73), standing in the middle. 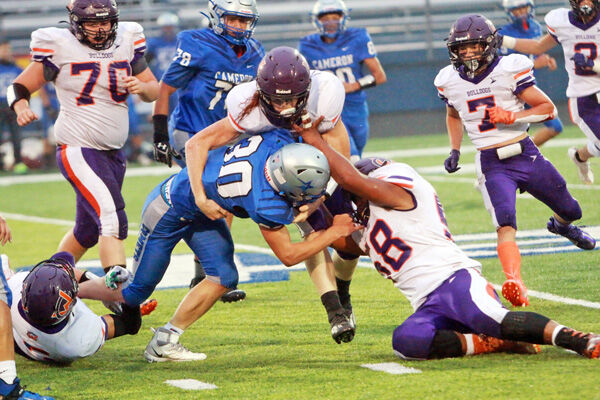 Pictured above, senior Tristan Wendt, along with juniors Tyler Monnier and Dom Townsend corral Cameron’s Cayden Gifford during the Comets’ 14-12 over the Bulldogs on Friday, Sept. 3.

Chetek-Weyerhaeuser had its opportunities to defeat the Cameron Comets on Friday, Sept. 3, but the hometown Comets prevailed down the stretch and hung on for a 14-12 victory. Pictured above is senior Carter Kummet standing in the endzone after he steamrolled over a Cameron defender and plunged across the goal line behind a nice block from teammate and C-W center Vinny Murray (No. 73), standing in the middle.

Pictured above, senior Tristan Wendt, along with juniors Tyler Monnier and Dom Townsend corral Cameron’s Cayden Gifford during the Comets’ 14-12 over the Bulldogs on Friday, Sept. 3.

In the first Heart O’North Conference action of the season, the Chetek-Weyerhaeuser football team lost 14-12 in a back-and-forth battle to the Cameron Comets on Friday, Aug. 27. The Bulldogs failed to capitalize on a few key opportunities throughout the game.

“I thought we played with great effort on Friday.  The guys flew around and had fun. In the end, we didn’t execute and had some little things that cost us. There were some breaks down the stretch that didn’t go our way. However, we had plenty of opportunities to win the game,” said C-W head coach Bill Knickerbocker Jr.

It took a full quarter for both teams to settle in, but the ‘Dogs (0-3 overall, 0-1 in conference) trailed 6-0 at the start of the second quarter after Cameron’s 1-2, 1-0) Caden Anderson made a phenomenal 21-yard catch in the end zone while being made this an impressive performance was that she shaved nearly two minutes from her best time on this course at the end of last season when she was in very good running condition. She is only a minute away from her best time, and this course is very hilly. The work she has put in physically and mentally since the completion of last season has paid off. We can anticipate a major drop in time for next week.

Zoe Nelson came in just behind Elliana with a 26:50. This is 23 seconds faster than her time on this course one year ago. Looking at Zoe’s times last year, she tends to start out the season quite conservatively and peaks at sectional/state time. I am confident that this will be the case this season. I also expect her to be running side-by-side with Elliana in the upcoming races which will improve their times. It will be very important that they shave off more places on the final score.

Following them were Roci Hanson (29:11) and Angie Hansen (32:08). For both of these young ladies, this was their first official 5K cross country race. Due to their nervousness preceding the competition and injuries, they still had impressive finishes. Roci has been nursing shin splints and Angie, knee pain. They fought through this and did not walk at any time during the race. Finishing their first race will at least double their confidence for the next race. Breaking that barrier is so important for many first-year runners.

We received some terrible news the morning of the race that Owen Hamholm would not be able to compete in the competition. He developed serious pain in his arch, and it was impossible for him to even walk without pain. We will monitor his situation and get him back on the course ASAP. Biking, elliptical machines and swimming will be on his list.

Leading the team was junior Elijah Poppe. He had a great race and finished 7th overall with a time of 18:44. This is nearly 2 minutes faster than what he ran on this course one year ago and 30 seconds faster than his time at the Heart O’North meet in October of 2020. He is only going to get better. Elijah is determined to be one of the top runners in the conference, and I am confident that he has the physical and mental ability to finish close to the top in the area by the end of the season. He is a smart runner and plays off his opponents in the race. He was awarded a top 10 medal for his efforts.

Our 2nd runner was Austin Hamholm who finished with an unbelievable 20:10. This is his best race ever. Going into this race, his personal record was 20:39 on a very flat St. Croix Falls course in October 2020. At this rate, he should be into the low 19s or high 18s by the end of the season. Besides his solid work ethic, I credit his success to his focus. He hears my voice in the races and does everything I instruct him to do. As a coach, this is very pleasing since we try our best to read the ability and potential of our athletes in the middle of a competition.

Our 3rd and 4th runners were senior Will Beckman 23:47) and junior Braden Cella (24:42). Both had great races. For Will, this was a personal record by over a minute. Will did a lot of running this summer which I can see in practice and was evident in the race. I see him getting better with more experience; he  will continue to be a leader on this team. Braden ran nearly three minutes faster than he did in our inter-squad race a few weeks back. He remained focused for the entire race despite the pain of shin splints that have plagued him along with side stitches that do not seem to go away. He continues to power through these challenges. He is getting stronger by the day, and his presence on this team is needed as seen by his teammates who gravitate towards him. Finishing in the 5th position was freshman Frank Loew with a 32:17 which is approximately 1:30 faster than he has ever run. One challenge that Frank and many athletes new to running distance have to face is the temptation to stop and walk during a competition. Frank fights this thought and refuses to walk. In the last mile I saw Frank battling with others, but he was strong enough to pass them. I can see Frank running below 30 minutes before the season is over.