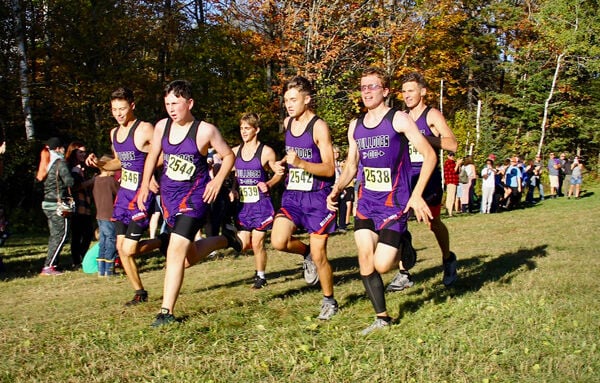 The Chetek-Weyerhaeuser boys cross-country team chose to run the entire 5K as a team at the Hayward Invitational on Tuesday, Oct. 5. Pictured above is the boys team receiving an ovation from the crowd coming down the home stretch. 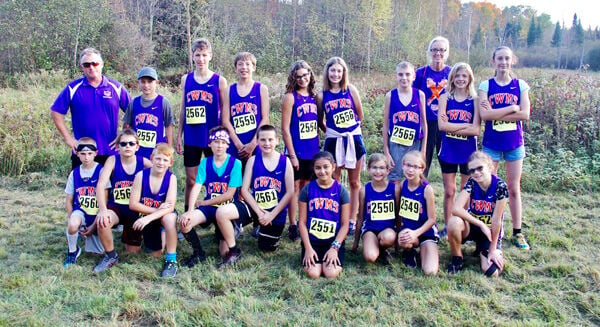 The Chetek-Weyerhaeuser boys cross-country team chose to run the entire 5K as a team at the Hayward Invitational on Tuesday, Oct. 5. Pictured above is the boys team receiving an ovation from the crowd coming down the home stretch.

The Bulldogs cross country teams travelled to the beautiful hills of Hatchery Creek County Park in Hayward on Tuesday Oct. 5. By beautiful, we’re talking many challenging and steep hills.

On the girls side, C-W was at very low numbers and had only two runners competing at the Hayward Invitational. Freshmen sisters Roci and Angie Hanson were recuperating from injuries sustained a few weeks back and we decided to hold senior Lana Blumer out to ensure that she would get ample rest prior to Conference and Sectionals. It is a tough decision to hold an athlete out of a competition, especially those that love to compete—Lana is the prime example of this.

There were 73 total finishers in the girls’ race. Sophomores Elliana Bayer finished 25th at 26:37 and Zoe Nelson 39th at 28:42. Elliana continued to push through the race and has proven that she has more than one speed. As the season has progressed, she has been able to find another gear that involves power and  acceleration. She has developed a “kick” that has not been on my radar until this race. Zoe was certainly tested on this hilly course. After the race, she noted some frustration but we are confident her grit will prevail next week in Ashland for the Heart O’North Championships. This is one of the many reasons she received the Owen Knutson Heart of the Bulldog Award this past week.

The C-W boys finished with the most points at Hayward; but in cross country terms, that is not good. However, in our case it was a team victory.

Last week the boys decided that they would like to run as a group with their teammate Frank Loew. As a coaching standpoint, I had no problem with that decision as this is their team.

From the gun, Will Beckman, Elijah Poppe, Owen and Austin Hamholm and Brayden Cella locked onto Frank and ran together for the entire 5K. They all finished at 30:59, crossing the finish line together as one. The goal was to get Frank’s time below 30 minutes, but the hills made it pretty tough.

As they came out of the forest at the halfway point, I heard them encouraging each other, laughing and enjoying the moment. I even saw two young runners from Ashland join the back of their group for a few minutes. What made this memorable for me was their last 100 meters. There was a sea of purple heading down the hill to the finish line. To hear the applause from the spectators made me very proud to be part of this program.

Following a week of rest and recuperation, the Bulldogs competed in the HON Championships at the Norwood Golf Course in Ashland on Tuesday, Oct. 12.

The Bulldogs middle school cross country teams completed their season at the Hayward Invitational on Oct. 5.

Noah Nelson brought home a top 10 finish by placing 3rd out of 50 runners with a time of 9:27. As a team the middle school boys placed second out of 14 participating teams.

The middle school girls placed 4th and were led by Skylar Schaaf who placed 17th out of 37 runners with a time of 12:06 on a very challenging 1.5 mile trail.

A big part of our team’s success has been the leadership of our eighth graders. Ryder Hackseth showed steady improvement all season and had a top 10 finish at Ladysmith. Ryder is a quiet leader who set the example of moving forward every week.

Elliot Rihnset set the example of being consistent. He has wonderful running form and is a quiet leader that the coaches could always count on.

Finally, Noah Nelson had a top 10 finish in every race in which he was a competitor. Noah brought a competitive edge that made the boys team finish high in every race and win the Bloomer invitational.

We completed our season at Hatchery Creek Country Park which is a part of the Birkebeiner ski trail and offers some wonderful views and a very hilly terrain.

The coaches appreciated the closeness and commitment of our team this season. We rarely had kids missing practice or kids missing meets because of grades. Starting and finishing are life skills that will always be timeless.