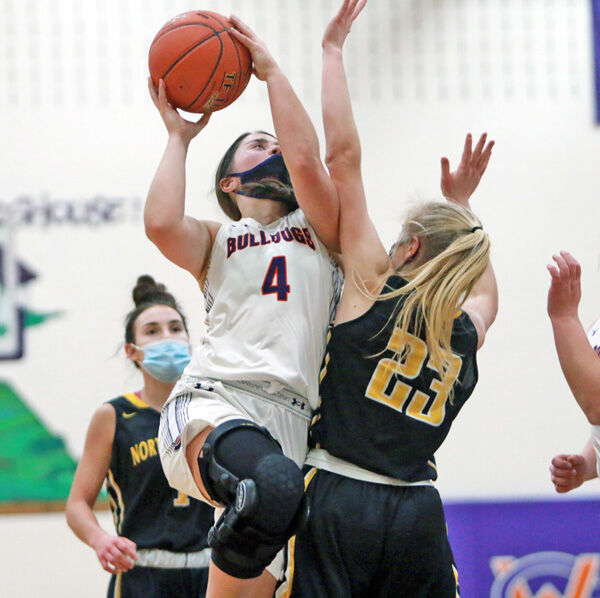 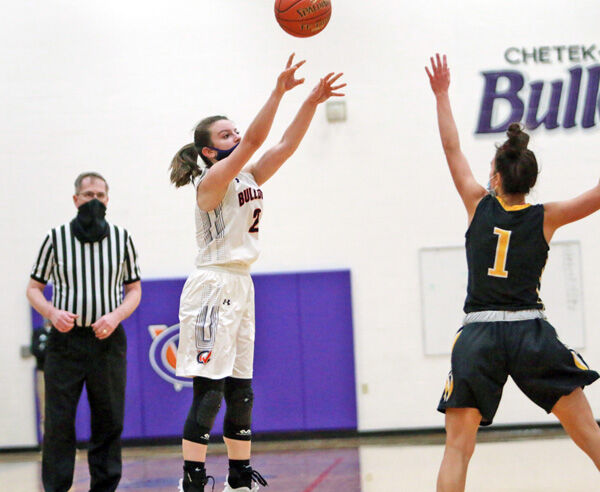 Pictured above, senior Madison Haas shoots a contested three-pointer that she made in the first half against the Tigers. Haas made seven shots from beyond the arc in the three games last week for the ‘Dogs.

Pictured above, senior Madison Haas shoots a contested three-pointer that she made in the first half against the Tigers. Haas made seven shots from beyond the arc in the three games last week for the ‘Dogs.

The lady Bulldogs basketball team saw their two-game winning streak end with a six-point loss to Cameron, followed by a 13-point loss to Northwestern last week. Fortunately, Chetek-Weyerhaeuser bounced back with a convincing 19-point win at Spooner to wrap up a busy week.

Seniors Emma Sather, Maggie Timm and Madeleine Schofield all had solid offensive performances—Sather had a team-high 16 points, followed by Timm with 15 points, and six assists, and Schofield with 14 points, seven rebounds and three assists.

However, Cameron’s Maddie Wall and Eden Dellinger shined as well and proved to be too much for the ‘Dogs down the stretch. Wall poured in a game high 24 points and dished out seven assists. Dellinger added 18 points, 17 rebounds and five blocks.

It was an entertaining first half with action on both ends of the court, but Cameron led 34-30 at the break.

Timm and Sather provided eight points apiece in the first half, including two three-pointers from Timm. Schofield scored seven points. Senior Madison Haas knocked down one shot beyond the arc, while junior Mariah Bilodeau chipped in two points.

Wall had 12 first-half points to pace the Comets.

The second half remained neck-and-neck as fouls piled up for both squads. The free throw battle down the stretch slightly favored Cameron in the final minutes as they were able to hang on for the five-point victory.

Following the loss at Cameron, C-W hosted Northwestern (10-2, 9-1) on Friday, Jan. 8. Despite leading midway through the first half, the Tigers clawed their way back and secured their lead in the conference with a 54-41 win.

C-W played well the majority of the first half and led 17-14 with four minutes remaining. But the Tigers stole momentum when they went on a 14-2 run to end the half. Tieryn Plasch and Allison Luoma combined for 27 of Northwestern’s 31 first-half points to propel the visitors to a 31-19 lead.

Northwestern extended their lead to 20 points in the second half, although the Bulldogs never quit in the 13-point loss.

“We are competing, which is a good sign; but time is running out on a shortened season. We have less than a month left of the season and I need to figure out how to get the girls from just competing, to round that corner and be able to shut the door on opponents,” C-W head coach Patrick Boughton explained.

C-W ended the week on a positive note, routing the Spooner Rails (0-9, 0-8) 65-46 on Monday, Jan. 11. Complete statistics from the game were unavailable at press time.

The Bulldogs came out ready to play, especially defensively, holding the Rails to just nine points in the opening 18 minutes. At halftime, C-W had a commanding 27-9 lead.

Both Timm and Sather had eight points in the first half, while sharpshooter Haas buried a pair of triples. Olivia Schofield also added a three-pointer.

Sather finished with 18 points, followed by Haas and Timm, who both had 13 points. Olivia Schofield had a season high nine points, while Madeleine Schofield had six.

““I’m happy with the overall effort of the team, but there are times when we just commit too many mistakes, whether it is at the free throw line, in transition, or just making the right decisions, things get crazy on the floor for stretches of each game. We have to find a way to stay composed and realize it is okay to hit a rough stretch in the game where the other team makes a run; but, we can’t compound that with our own mistakes,” Boughton noted.

“I believe in these girls and I really do think they have what it takes to get to a Regional Final. But, we really need to dig deep to get their best out of them night-in and night-out, and that task will be up to my staff; I have to find that inside them. If we can tap into their positive energy flow, I know I wouldn’t want to play this team in the playoffs.”