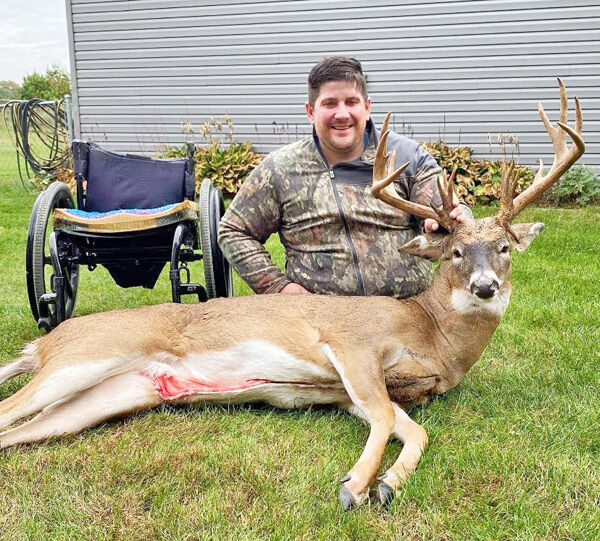 Chris Stanek, who is an Eau Claire resident and lifelong visitor to Chetek, harvested this massive 19-point buck on Oct. 5 during Wisconsin’s disabled hunt. The trophy buck green scored 182-3/8 and has 7 brow tines and one drop tine on the base of the left antler. 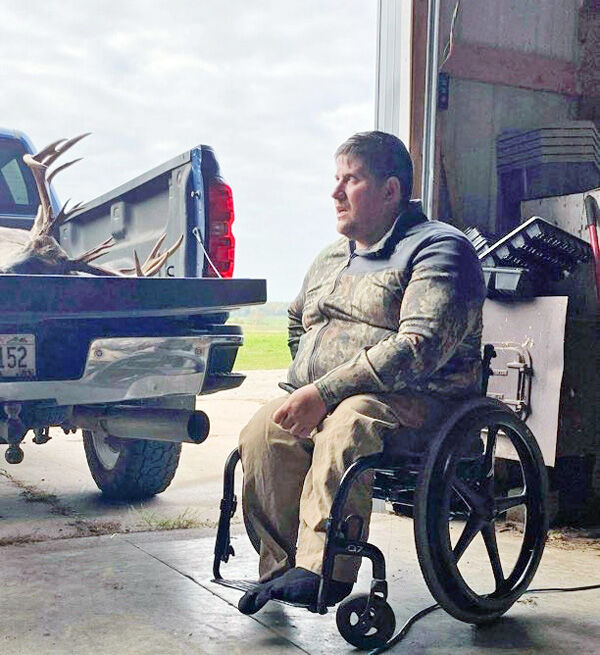 Chris Stanek, above, harvested an impressive 19-point Dunn County buck on Oct. 5 while hunting in the annual Gun Hunt for Hunters With Disabilities Hunt.

Chris Stanek, who is an Eau Claire resident and lifelong visitor to Chetek, harvested this massive 19-point buck on Oct. 5 during Wisconsin’s disabled hunt. The trophy buck green scored 182-3/8 and has 7 brow tines and one drop tine on the base of the left antler.

Chris Stanek, above, harvested an impressive 19-point Dunn County buck on Oct. 5 while hunting in the annual Gun Hunt for Hunters With Disabilities Hunt.

Editor’s note: Chris Stanek has been coming to Chetek nearly his entire life, and his passion for the outdoors drives him to set and fulfill goals every year. Whether he is deer hunting, ice fishing or on a different outdoor adventure, Stanek refuses to let anything get in the way of his dreams.

Chris Stanek, a Chetek regular and current resident of Eau Claire, will have a tough time topping this year’s trophy buck. However, challenges are something Stanek has thrived on his entire life, so don’t be surprised if he bests this buck in the near future.

Hunting in Dunn County during Wisconsin’s annual October Hunt for Hunters With Disabilities, which ran nine days from Oct. 2–10, the 37-year-old harvested a massive 19-point buck that carried a staggering 7 brow tines, along with one drop tine. The mature whitetail green scored 182-3/8 inches and is Stanek’s biggest buck to date.

Making the story even more special was the fact that the trophy buck and Stanek had history together dating back to last season. During last year’s gun hunt, the buck busted Stanek when his gun accidentally jammed as he attempted to harvest the buck. However, several trail camera photos from later in the season and again this year—even after he was wounded during archery season by another hunter—proved the giant buck still remained in the area.

Born with spina bifida, Stanek has always being faced challenges. But as goal-driven as he is, he refused to give up on this particular buck as he hoped for a shot at redemption entering the 2021 season.

“One of my call cameras sent a trail camera photo to me opening night of the disabled hunt, and it showed he was in the area I was hunting. I honestly just felt deflated at that point. But, I said I was going to hunt that spot until I got him,” Stanek recalled.

On the fourth night of Oct. 5, Stanek headed to the woods in his wheelchair to his customized elevated tree stand. The stand uses a winch system that hoists Stanek and his track wheelchair 16-feet up  and onto a platform.

Around 6:15 p.m., Stanek heard antlers banging together behind his stand. All he could see was the sun shining against a huge set of antlers just 25 yards from his stand. Because he was hunting in his wheelchair, turning to and shooting the deer wasn’t as easy as one would expect.

“I remember thinking ‘it’s game time!’ instantly; but then realized I had to adjust the placement of my gun before anything. Then I had to move in my wheelchair to adjust my shooting angle. Leaning as far as a I could to my left, I could see his front shoulder and when I shot, I could tell I double-shouldered him,” Stanek explained.

With adrenaline pumping, Stanek watched as his buck mule-kicked and staggered off before falling in sight of his stand.

“I was shaking so bad after the shot. I couldn’t believe I got him. When I called my neighbor, I was stuttering, begging him to come see the monster buck,” Stanek said.

He and his neighbor had a pact that if either of them ever harvested the buck, they wanted the other to help with the recovery and enjoy the special celebratory moment.

“We just admired the beauty of him, shared a lot of high fives and hugs. My mom brought the UTV to get him out of the woods. It was a really fun memory. It felt like I was never going to get a second chance at him. That just goes to show you, even if you mess up, don’t give up. Keep at it and redeem yourself,” Stanek noted.

It’s Stanek’s second biggest buck, harvesting a 140-class buck a few years prior. He is having a full-body mount of the deer by Richard Hovland Taxidermy out of Colfax.

Stanek discussed the challenges of hunting and fishing while being disabled. Although it hasn’t always been easy, he feels it has helped him appreciate his time in the outdoors as he endures the challenges.

“There’s always been challenges for me. From a personal standpoint, some people can be mean or say hurtful things. But you learn to adapt and some of that makes you tougher. I like the challenges, though. People will say you can’t do something, and when you succeed and do well, it feels rewarding. This buck is just the icing on the cake.”

Stanek’s attributed his outdoor passion to growing up and fishing on Ten Mile Lake in Chetek at his grandparents’ house. He admitted that Chetek is basically his second home.

“I’ve set a lot of outdoor goals over the years. Catching a 40-inch northern through the ice in Chetek was another big goal I’ve accomplished. Now it’s just onto the next challenge. I’ve been thinking about documenting my hunts, fishing outings and outdoor adventures while capturing it all on video. I would like to start doing that in the next year,” Stanek said.

Stanek just started a Facebook page called “Wheels Outdoors” where those interested can see more photos of the trophy buck he harvested along with other hunting and fishing outings.

“I just want people to know anything is possible if you put your mind to it. Just believe in yourself,” Stanek concluded.