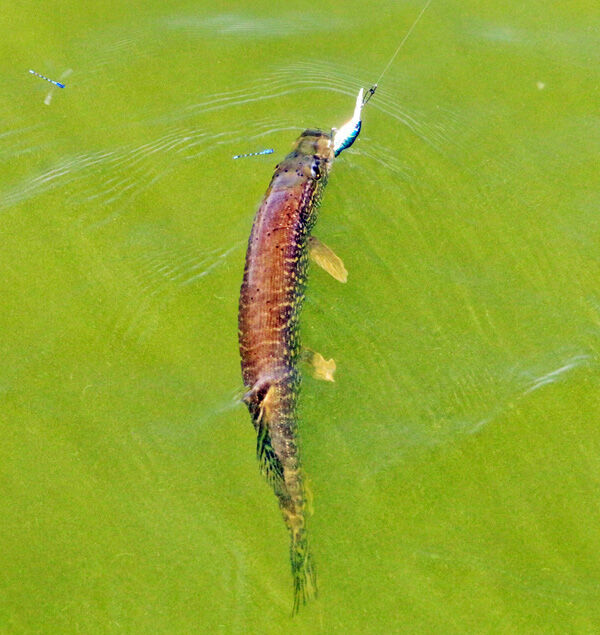 Northern pike anglers will find plenty of action on the Chetek Chain of Lakes as we approach the dog days of summer. Pictured above is a roughly 28-inch northern pike Steve Sedani, owner of Up-Der North Guide Service, caught on Lake Chetek last week while trolling crappie-colored artificial baits to mimic the local forage bait. Pictured below are a variety of lures, such as Rapala Shad Raps and Berkley Flicker Shads, that will work in the coming weeks when trolling for pike, walleye and bass. 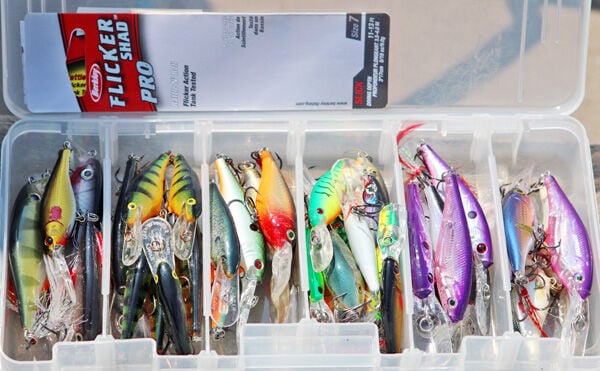 Pictured above are a variety of lures, such as Rapala Shad Raps and Berkley Flicker Shads, that will work in the coming weeks when trolling for pike, walleye and bass.

Northern pike anglers will find plenty of action on the Chetek Chain of Lakes as we approach the dog days of summer. Pictured above is a roughly 28-inch northern pike Steve Sedani, owner of Up-Der North Guide Service, caught on Lake Chetek last week while trolling crappie-colored artificial baits to mimic the local forage bait. Pictured below are a variety of lures, such as Rapala Shad Raps and Berkley Flicker Shads, that will work in the coming weeks when trolling for pike, walleye and bass.

Pictured above are a variety of lures, such as Rapala Shad Raps and Berkley Flicker Shads, that will work in the coming weeks when trolling for pike, walleye and bass.

Northern pike are a fish often overlooked by anglers fishing the Chetek Chain of Lakes. Not only do they sit atop the food chain, but they are fun-to-fight predatory fish, as well as excellent table fare. Anglers willing to target northern pike in the next few weeks can experience the thrilling feeling of catching the toothy critters.

In shallow lakes like the Chetek Chain, dusk and dawn are usually the prime times to fish for northern pike although they can remain active throughout the day.

Northern pike typically are found in 3 to 10 feet of water, but can be located among structure, near vegetation or along drop-offs. Pike will also head to the coolest parts of the lake, in 10 to 15 feet of water late in the summer when water temperatures reach 80 degrees.

Water depths under 10 feet are easily fished with either live bait or artificial baits. Trolling becomes another effective option as well, once water depths reach 5 feet and deeper.

Locations: where to find pike

With summer comes bright sun and warm temperatures when northern pike will seek out deeper water. Their feeding habits can vary to coincide with the locations of the bait fish. Pike will also head towards weed beds during this time as the vegetation shields them from the sunlight. Pike can remain cool and concealed in the vegetation and ambush other prey species seeking out the same cover.

“At this time, pike are generally in 8–10 feet of water. Weed lines off the main lake basin are great places to try for pike if you’re casting or trolling. Other spots I like to try when trolling are drop-off areas, gravel bars or points and sand bars when the areas aren’t being used for swimming,” Sedani explained. “However, anglers looking to cast or big bobber fish with live bait should target creek mouths, shallower bays with vegetation and some of the shallower lakes of the Chetek Chain.”

Sedani noted that Ojaski Lake, Moose Ear, Ten Mile Lake, the north end of Prairie Lake and places like Pikes Slough on Pokegama Lake are all viable areas that hold pike year round.

Bait choice: What to use for pike

When it comes to pike fishing in the summer, anglers can be successful with both live bait and artificial baits, mainly because of how active northern pike are in late July and August.

The most common method when fishing pike with live bait is using a slip-float or bobber with suckers. Anglers will want to use either a No. 6 or a No. 4 treble hook and hook the bait fish in behind the dorsal fin. Many anglers using live bait for pike and muskie also like to attach trailer hooks or stinger hooks to their main treble hook, which increases hookups when fishing with big bait for big fish.

There are literally hundreds of artificial baits anglers can use to catch big pike. Some of the most effective and most popular baits include Rapalas, spinnerbaits, spoonbaits, jerkbaits, Daredevils, Johnson Silver Minnows and really any type of bait that can imitate a baitfish or panfish.

“Some of my favorite baits carried at the local Rod & Gun Sport Shop here in Chetek are the Rapala Husky Jerk, along with floating Rapalas and the Smithswick Rattlin’ Rogue. You can cast or troll with those baits. Some of my favorite trolling baits when targeting pike—and really all of the game fish in the Chetek Chain—is the Berkley Flicker Shads, Rat-L-Traps and Rapala Rippin’ Raps,” Sedani noted. “Spoon plugs are another great bait for pike.”

It’s also a good idea to use steel or fluorocarbon leaders when fishing for pike due to their razor-sharp teeth.

Other tips when targeting pike

• Anglers planning on fan-casting areas or setting out live bait rigs with suckers will want to fish in water depths of 7–8 feet or less. Most of these areas mentioned earlier in the article (creek mouths, weed lines and shallower bays, areas with submerged wood/stumps) will often be the best places to try these methods, versus casting into deep edges of the main lakes.

• When trolling, head to the main lakes and look for water depths of 7–12 feet. Weedlines, drop-offs and rock bars/sand bars are prime locations.

• When trolling, anglers do not need expensive rods. Use a medium or medium-heavy action rod, ranging in lengths from 6 feet to 7 feet, 6 inches.

• When trolling, the boat speed should be somewhere between 1.8 to 3.0 mph. Lures should be trolled at least 75 feet behind the boat/pontoon, but most lures run true at 100 feet.

“If your bait is skipping across the surface, you’re likely trolling at too fast of a speed. It will take a little practice, but most anglers watch their rod tip when trolling to make sure the lure they are using is running correctly and is free of weeds/debris. The rod tip will methodically vibrate to the lure’s action as it works under the water surface and soon enough, anglers will understand exactly what to look for and how to properly troll,” Sedani said.

• Try to pair bait colors to the forage the fish are likely feeding on in each particular area. Blue and silver baits will mimic crappies found in the Chetek Chain, whereas the gold or gold/orange baits imitate golden shiners, perch and bluegills.

“A lot of the panfish are suspended in the water column right now because of the warmer surface temperatures. Stay active and try a few different water depths, or bait choices until you find what the fish want,” Sedani concluded.